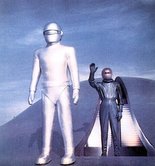 Remember Gort? Here’s his image, courtesy of John Vonderlin.
Hi June,
Being a student of all things odd, it’s my opinion that there is hardly a more self-deluded group of distortionists and self-promoters then the “researchers” of Atlantis. Particularly, those who insist there is substantial evidence that it was in the Caribbean. Christopher Dunn, the publisher of “Atlantis Rising Online,” while a believer in previous highly advanced civilizations, now disappeared, was the researcher who helped me identify the source of the star-shaped or petal-shaped holes in rocks I had found near Pescadero and a few other places. Here’s a quote about an email he received from Richard Wingate, an Atlantean “researcher” of the former kind.

“In support of his premise that these are the stones of Atlantis, Wingate described petal-shaped holes drilled through 12 feet of granite,a feat that he says would require sonic drills”.

As I alluded to in a previous email, Mr. Dunn, investigated this himself and traced the blocks of stone with star-shaped holes back to a project that transported blocks of quarried limestone on barges, which occassionally sunk, from the Moselle Shoals to build the Miami jetty in the 1920s. The mysteriously shaped holes, some spiralling through the blocks, were the product of concussive rock drilling machines with star-shaped bits that had jammed.
I’m revisting this subject because I wanted to show you the amazing rock I found just feet from a cluster of the mysterious holes near Pescadero. (super bowl yard 008 photo) While I know what it is, I suspect it would have been used as powerful proof of alien visitation, Atlantean Super Science, or some such fantasy by Mr. Wingate and his ilk in their next pulp “fiction” paperbacks.
Even knowing that it is of concretionary origin, I am amazed by the shape it took. It reminded me of the head of Gort, the large robot, in the classic 1951 Science Fiction film, “The Day the Earth Stood Still.” (Gort bmp photo) I’ve collected several other cases where concretions are asserted as being products of former high civilizations, one of the reasons I love these oddities. (Endako1 photo) Strangely, Creationists are also highly interested in them, with several of the objects on their O.O.P.Arts (Out of Place Artifacts) list being of concretionary origin. They feel the discovery of these objects in ancient rock layers is proof that Geologists and the rest of the pointy-headed intellectuals trying to convince us of Evolution or an extremely old Earth are wrong. But, that’s another story.
For a while I had a large assemblage on my studio floor entitled “She Spawns,” that included this rock and a number of my other concretions. (she 006 and 026 photos) Enjoy. John Vonderlin 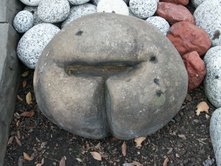 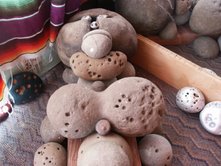 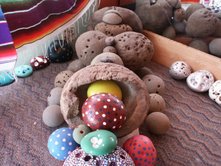