Flotsam in the nearshore takes that path in our area because it is driven by the longshore current (littoral drift)–which in turn is driven by the prevailing northwest winds. I believed once they floated in, they were trapped and were subsequently rounded off by rubbing against the rough grit of the sand, just as in a rock tumbler.

I believed this effect, which should exist in almost any promontory-bounded cove, was strengthened by the topographical features of the shallow, flat reef that extended almost continuously along the length of the beach out to about fifty yards.

The reef’s rocks were composed of numerous sedimentary layers turned on edge with the differential erosion of the layers of varying hardness causing a series of parallel grooves and ridges. The ridges and grooves because of their southwest to northwest orientation would tend to guide any flotsam retreating from the beach directly into the prevailing northwestly winds, sending them backwards toward the beach.

I began to photograph easy- to- identify pieces of driftwood and noted they did indeed hang around for months. I also noted that occasionally in high surf conditions small quantities of driftwood were escaping past the southern promontory, to be temporarily spread thinly over the beaches to the south; then disappear.

I began to call the small embayment where they were usually concentrated Roach Motel Embayment, after the commercial about the baited box in the commercial that brags, “They check in, but they don’t check out.”

Still, so many of the pieces I was finding were different from the normal driftwood I was used to finding, I knew I wasn’t seeing the full picture. Plus I was perplexed that in all my trips there, I’d never actually seen any pieces float in. One day while collecting some more pebbles I learned…”The Rest of the Story.”
I hadn’t ever seen them floating in because they weren’t. The pieces weren’t floating in because at some point in the oceanic phase of their existence they had become waterlogged and sunk. 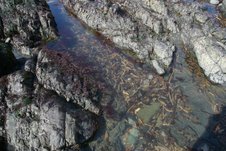 As they bumped along the nearshore bottom on their southward trip, from who knows where, they were being ejected onto the beach by a feature I came to call Neptune’s Vomitorium. This feature apparently also provided the path for the ejection of the pebbles and other objects onto the beach.

In a short aside, if you websearch “sinkers lumber,” you’ll find there is a number of thriving businesses that specialize in producing lumber from recovered waterlogged trees, many harvested from virgin forests hundreds of years ago before they sank to the bottom of lakes or rivers.

I further believe that after being ejected on the beach at Neptune’s Vomitorium, they would be moved southward by the waves a short distance down the beach to the Roach Motel Embayment.

At that point the factors I mentioned earlier came into play, more or less restricting them to this stretch of the beach.This also provided the explanation of why these piles of driftwood contained so many unusual shapes and types. Just as with rocks, where the harder a rock is, the better it tends to take a polish, the harder and denser pieces of wood; that is, knot holes, the underside support of branches, forks, heartwood, etc. were durable enough to last long enough to be rounded into attractive shapes. They weren’t doing it on the beach to any degree though. They were doing it during their silent procession along the ocean’s bottom in the nearshore.

With more research I discovered, Neptune’s Vomitorium, was at the site of a paleocreek. During the Ice Age, the ocean level was hundreds of feet lower because of all the water locked in glaciers. Consequently, the coast at that time was far offshore from its present position.

I’ve read that ten thousand years ago that was almost out to the Farallones. The creeks that ran off our local hills and mountains eroded canyons and valleys that have since been submerged by the rising waters that resulted from the melting of the glaciers. The ones that haven’t filled entirely with sediment are called paleocreeks.

For some reason, at Neptune’s Vomitorium, there is an interaction between the longshore current, the paleocreek, and other subsurface topography to episodically, but regularly, regurgitate large amounts of non-buoyant objects onto the beach like no other place I know.

Those objects include the pebbles from the offshore quartz ridge, waterlogged wood, and enormous quantities of non-buoyant marine debris from the fishing and crabbing industry, your lost beach items, and whatever lost or discarded trash that bounces along the bottom of the streams that drain the local watersheds.

In the last three years I’ve collected about ten trash cans full of these little treasure. 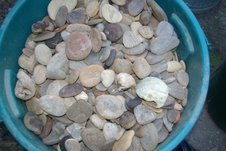 I sort them by size and shape for various planned artistic endeavors. Initially, I would drill them and string them by the hundred into what I called “Ocean Garlands,” a beachcombing version of the strings of popcorn we make for decorating our Christmas trees. 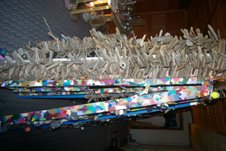 Lately, I’ve been using some of the more unusual ones I find in some of my thematic art exhibits. Check out the oval-shaped piece of wood. 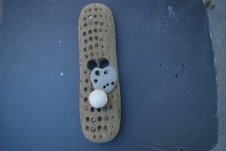 Do you recognize what it once was?***

I’ve combined this mysterious piece of driftwood with a golf ball core, the regurgitated remnant left after a poor shot’s long and degrading journey of nearly twenty miles to Invisible Beach, from one of the Ritz Carlton’s, world class golf courses, and a Hole-in-the-Heart Valentine Rockomorph. It is part of the several hundred pieces of art I have assembled for my “The Silent Procession from The Sunken Cathedral to Neptune’s Vomitorium.”

At this time, I want to move on to my next claim: Invisible Beach is the best marine-debris-collection spot on this coast. Enjoy. John Vonderlin

*****For the answer to what the driftwood was….see below

Hi June,
Neither I, or my beachcombing friend who found it, figured out what it was. However, several people recognized it when I showed it to them. It’s the head of a push-broom. The two slanted holes allow you to change the angle of the handle, keeping the bristles from getting too slanted in one direction, limiting it’s effectiveness. Enjoy. John Vonderlin.