The Fame of ‘Invisible Beach’ #1/Rocks by John Vonderlin

Invisible Beach: “Not even Big Sur, Jade Cove, or Cambria’s, Moonstone Beach, further south, have such an interesting pedigree or range of attractive stones.” 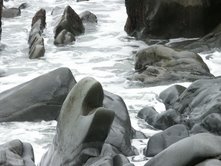 Hi June,
I’ve asserted that Invisible Beach is the most amazing, unusual, interesting, etc. place on the San Mateo Coast, if not the California or Pacific Coast. So far, I’ve only nibbled around the edges of the buffet of its wonders.

I realize that because my travels are limited, I can’t be sure. But thanks to my research on the Internet, various books, newsletters by collectors, and postings on various forums, I’m pretty confident I’m right. Let’s see if I can convince anybody else.

Earlier, I sent you a picture of the many varieties of the quartz family that can be found there. While their monetary value is minimal, their existence as the last significant remnant of the offshore quartz ridge that also created Pebble Beach, gives them some historical cachet.

Pebble Beach was Pescadero’s claim to fame in the last half of the 19th Century. It brought thousands of wealthy tourists and acclaim to sleepy Pescadero, in its Golden Age. to gather those pebbles. The protracted beach access legal battle between Loren Coburn and the townsfolk of Pescadero, with its mob violence threats and his wife Sarah’s subsequent murder as detailed in your book, “The Coburn Mystery,” added an aura of sadness, mystery and legal significance to their existence, carried on to this day by the pebbles found on Invisible Beach.

Not even, Big Sur, Jade Cove, or Cambria’s, Moonstone Beach, further south, have such an interesting pedigree or range of attractive stones.

While almost all the pebbles, despite their colorfulness, are too common to quicken the heart rate of a serious collector, there is one variety that I have never seen elsewhere. Nor have any of my postings of pictures on Rockhound forums produced either an explanation of the details of their origin or any information about the existence of ones like them from elsewhere.

I refer to hollowed out triangular quartz rocks as pictured in the attached photo.

Lastly, beside the pebbles, a few Donut NotRocks (collected and strung with shells in necklaces by the Ohlone natives of this area) and the extensive Tafoni structures on the rocks that bound the beach on its northern end, there is an unusual pareidolic rock, shaped like a whale head, that sits in the throat of Neptune’s Vomitorium, the channel that regurgitates the various oddities onto Invisible Beach. I’ve attached a photo of it.

Have I made my case? 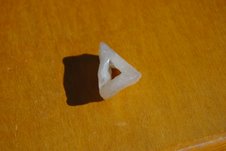