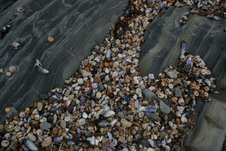 As I began regularly collecting the marine debris that was spit out by Neptune’s Vomitorium, onto Invisible Beach, I couldn’t help but note that often there would be clusters of certain types of debris. Knowing that moving water frequently does that because of the interactions of the water flow and the object’s density, surface area, and shape, I wasn’t too amazed at first.

After all, the clustering of objects on beaches is perfectly normal.

The typical clustering effect that’s visible on the average beach is characterized by the size of the sediment composing different parts of the beach; fine sand here, a gravel bank of similar-sized pebbles there, or a bed of larger cobbles over there; making you aware of its noisy presence every time a sizeable wave recedes.

Another less common, and slightly more mysterious clustering effect of beach sediment, that you can see occasionally where the waves reach a cliff, a bluff or a dune, manifests itself as black chevrons pointing seaward. These chevrons are usually composed of fine, but heavy particles of magnetite, moved into their characteristic shape by the myriad of forces working in the swash zone. They are called heavy mineral laminae and have been researched quite extensively. 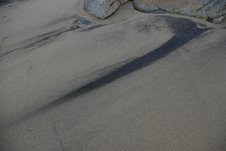 Invisible Beach displays all of those rock related clusters as well as the gravel bed at Neptune’s Vomitorium that contains all the varieties of quartz I have mentioned previously.. But, it also frequently displays clusters of expired critters whose pictures I put into a folder I call, “I See Dead Things.”

The most common dead-things-cluster at Invisible Beach is one most beach walkers are probably familiar with, a great number of mollusk shells of the same type dog-piling together as pictured in the photo at the top of this story.

It also occasionally displays the more tragically poignant clusters of freshly dead sea stars, seemingly saying good-bye to each other as pictured below. 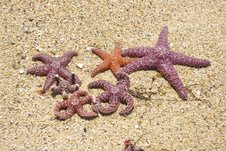 Shifting sand inundating their rocky habitat seems to precipitate this die-off. In an often futile attempt to avoid the encroaching sand, they’ll form long lines just above it on the rocks, actually touching each other. Unfortunately, this exposes them to the full power of the surf, with a fatal result.

Another notable, but normal, cluster that shows up at Invisible Beach, is that of the By-The-Wind Sailors, velella velella. 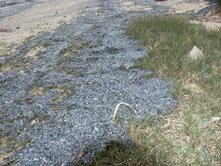 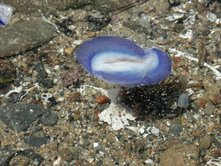 These beautiful, translucent blue hydroids, driven from their open ocean home by persistent westerly winds are stranded there by the hundreds of thousands most years.

All of these clusters, as well as the wrack, the waterlogged small driftwood rafts, and the large quantities of marine debris litter being regurgitated by Neptune’s Vomitorium all seemed to have reasonable causes. Those being the rocky promontories, a flat reef bordering the beach with northwest/southeast-facing groove-and-ridge eroded sedimentary rock, a paleocreek, the longshore current, wind patterns, wave surge, etc. But, there were other clusters not so easily explained.

What was the explanation for part of one day’s booty pictured in the photo below?(more then fourty socks) 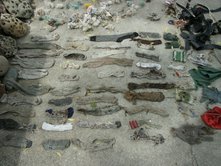 Had the Sock Monster’s Lair been hit by an accidentally dropped depth charge? Surely, socks of different size, different materials, different levels of seaweed or sand infiltration, some knotted and remnants of different size and material couldn’t be “birds of a feather.” all flocking together.

Even weirder, look at this photo 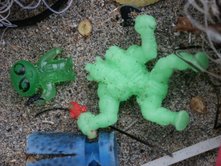 showing two of the lost souls of “My Posse,” just as I found them. I’ve only found twenty or so different examples of these little critters in three years. What are the odds that two of them would be found right next to each other? The next week I found the more heavily-armed clone of the smaller, darker green alien further down the beach to further mystify me.

Seemingly just as odd was finding the two handicapped lovers I used in one of my early pieces of Litterarty. 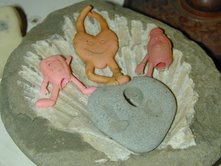 They were about a foot apart on the beach when I picked them up. Unfortunately, that was early in my experience with the oddities of Invisible Beach, and I didn’t photograph them where they lay.

Strangely, I had an epiphany about a year later that explained to me satisfactorily why they were so close. Before, I had my revelation I had assembled a piece of art and called it “Love Conquers All.” The story in my mind was that their love had conquered everything from missing limbs, abandonment to the sea; even the pounding surf on a rocky coast could not separate these lovers. The little heart with arms raised in triumphant recognition of their victorious love, the Hole-in-the-Heart Rockomorph signifying the wounds lasting love must endure, and the “Birth of Venus” aspect suggested by the fossil shell base all reinforced this portrayal of their powerful unbreakable bond, love-enduring. Alas, the actual explanation my epiphany revealed that I’ll detail in a following email is much more mundane.

While Invisible Beach, has produced many other hard to explain Marine Debris clusters, I wanted to include a picture of another strange cluster from another beach. 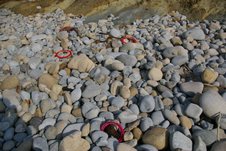 It shows four of the seven Aerobie Rings that showed up one day within fifty feet of each other and have continued to show up episodically at the smaller, less consistent, and less diverse vomitorium at Pescadero Beach. For some reason this particular vomitorium (I know of three) specializes in tires and tire parts, Aerobie Rings, shoe soles and swim goggles and not much else. It is located down the stairs to the right from the parking lot directly across Highway 1 from Pescadero Rd.

Lastly, to demonstrate the ejective power of Neptune’s Vomitorium, I’ve included an example of the buildup of wrack that happens at its mouth. Enjoy. John Vonderlin