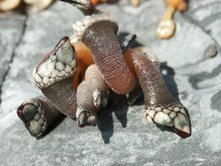 Hi June,
There was one unusual “I See Dead Things” cluster at Invisible Beach that only appeared once, but has left me hoping for its return. Though, instead of being a cluster of a number of the same things, it was a cluster of different things I had never or rarely seen before. Some of the things I have never been able to discover what they were, others I now know what they are and have seen minor clusters of them at Invisible Beach since then. Why they all showed up that day is still a mystery I’d like to solve.
The photo above shows a group of Gooseneck Barnacles. Thank you Wikipedia for the following:
“In the days before it was realised that birds migrate, it was thought that Barnacle Geese, Branta leucopsis, developed from this crustacean, since they were never seen to nest in temperate Europe, hence the scientific and English names. The confusion was prompted by the similarities in colour and shape. Because they were often found on driftwood, it was assumed that the barnacles were attached to branches before they fell in the water. The Welsh monk Giraldus Cambrensis claimed to have seen goose barnacles in the process of turning into barnacle geese in the twelfth century.” 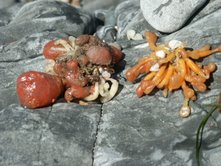 but I’m not sure what they are. Some kind of algae. I think I’ve seen small portions of the red one a few times since. 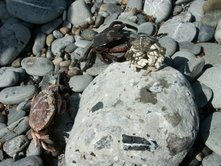 is of a common rock crab with an uncommon number of barnacles, a dark kelp crab that shows up dead on the beach once in a while in small numbers, and some kind of weird crab I’ve never seen before or since.
Here’s a little filler about fiddler crabs that demonstrates that there is a lot more going on at the beach then you’d think:

” A “hoodie” increases your chances of having sex if you’re a male fiddler crab living in a neighbourhood plagued by predatory birds, say researchers.
The researchers attracted predatory birds to a sand flat. They found that the female crabs showed an even greater preference for hooded burrows when they were at greater risk of being eaten. The more the crabs felt they were at risk, the more the females chose to visit burrows that had hoods over, than those that did not. (The researchers determined how “at risk” the crabs felt by counting the number of times they retreated into their burrows to hide from the birds.)
Until now, females across species have been believed to select males with genetic traits that will give their offspring a better chance of survival, or males that will increase their reproductive success for instance by providing her with more, or better, food.
Tae Won Kim says that their discovery that females choose their mate based on signals that benefit them directly is “a fundamentally new and perhaps widely applicable idea”.
Then there is this little nugget about our local fiddler crabs:

California fiddler crabs may be among the world’s pickiest animal when it comes to selecting a mate.

A study conducted by a biologist at the University of California, San Diego that appears in the August issue of the journal Animal Behaviour found that females of the species Uca crenulata may check out 100 or more male fiddler crabs and their burrows before finally deciding on a mate.

“As far as I know, no other species has been observed sampling nearly as many candidates as the California fiddler crab,” said Catherine deRivera.
“Most animals sample just a few mates, presumably because search costs override the benefits of lengthy searches,” she said in her paper. But female California fiddler crabs are much pickier, she discovered in her study, checking out male suitors and their bachelor pads an average of 23 times before making a final selection. One particularly choosy crab visited 106 male burrows, fully entering 15 of them, during her one hour and six minute search.”
Wow. Now that is what I call Speed Dating. Enjoy. John Vonderlin