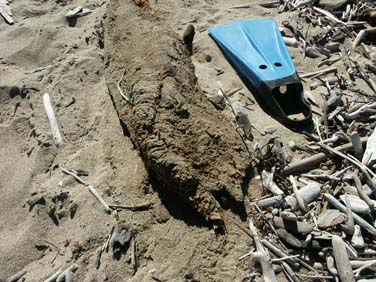 If I was asked, “What is Pescadero’s greatest claim to fame?,” I believe it would be easy to decide. I think I’ve been building a good case with my photo essays that Invisible Beach, with its odd Neptune’s Vomitorium, is its most amazing spot. But since only a handful of people know where it is, that is eliminated.

And while Pebble Beach, as detailed in your book, had both its run of touristic glory two centuries ago for its colorful pebbles and its precedent-setting legal significance as a critical beach access court battle, its fame has subsequently diminished just as the number of pebbles have.

No, I think it would have to be a Sea Monster that Pescadero is most famous for. Before you think I’ve been reading too many Calvin and Hobbes comic strips let me explain.

If you look at a map of the San Mateo Coast you’ll note that Pescadero Point sticks further out into the ocean then anything south of the promontory that forms and protects Half Moon Bay. Because of this it tends to be a spot where floating objects become stranded. This is born out by the fact that the heaviest concentration of rocks coated with old tarballs on our local coast occurs there. In one place they are so concentrated it almost looks like somebody had made an asphalt road over the reef and into the sea.

More relevantly, it is the spot that Monsters from the Sea are most likely to run aground after death. And so it was when Ms. Blue, as she was dubbed, washed ashore at Fiddler’s Cove, just north of Pescadero Point, on September 6, 1989. Ms. Blue, was an 87 foot long female blue whale (Balaenoptera musculus). I’ve been told that because of repeated strandings of whales on Pescadero Point through the years that some locals call it Whale Point.

While science and knowledge have removed most of the mystery and terror historically associated with sightings of giant squids, octopuses, manatees, whales and other “Monsters of the Deep,” they have not removed our fascination. Witness the crowds that inevitably brave steep cliffs, the horrendous smell and even the danger posed by an exploding carcass to get a closeup view of these creatures in death and you’ll know this is true. So it was with Ms. Blue.

I’ve attached pictures of Ms. Blue’s skeleton and the photographic plaque of its stranding and skull removal, that I photographed at the Long Marine Lab / Seymour Marine Discovery Center in Santa Cruz, where she is displayed. I’ll return to the danger of exploding whales later. For now here is an excerpt from the Discovery Center’s website dealing with the whalenapping of Pescadero’s greatest claim to fame.

“For reasons still unknown, a dead blue whale washed ashore at Fiddlers Cove near Pescadero on September 6, 1979. After several days of jurisdictional uncertainty, biologists and students from UC Santa Cruz began the long and fragrant task of “flensing,” removing the blubber and flesh from the whale. The process took nearly a month.
Transported by helicopter and truck to the marine lab, the skeleton lay in Whalea grassy field just downwind of lab buildings for over a year before being buried. Burying allowed nature’s decomposers to clean away the remaining tissue and oil that saturated the bones. In the summer of 1985, the bones were unearthed and reconstruction began. Frank Perry, a local geologist and museum specialist, was hired to clean the bones and mount them for display. Working with lab staff and specialists from the Santa Barbara Museum of Natural History and the California Academy of Science, they constructed a steel framework to support the bones and recreate the proper arch of the spine. The job was completed in late 1986.”

In the last few months there have been an unusual number of dead humpback whale strandings on Bay Area beaches that inevitably draw crowds of the curious. I offer the followed information as a cautionary tale. Beware of exploding Marine Mammal carcasses. I don’t mean the kind of exploding caused by the foolish use of dynamite at the famous Florence, Oregon mishap that rained chunks of flesh and blubber on cars a quarter of a mile away. The video and details of this oft written about lunacy is easily encountered by a websearch of “exploding whale.”

I’m referring to the kind of explosion caused by the buildup of internal pressure caused by decomposition. The most famous case of this kind of explosion occured just a few years ago when a 55 foot whale was being removed on a truck through downtown Tainin City, Taiwan. It exploded from internal pressure, showering people, vehicles, and storefronts with gore and intestines. Looking at the pictures available on the web of this incident, my guess is only good fortune prevented serious injury or death for the hundreds of gawkers gathered to watch its passing.

Whales aren’t the only source of danger. Though I can’t confirm it, I still remember reading as a young teenager in San Diego about a jogger on the beach being killed by an exploding sea lion carcass on a hot day. If that seems far-fetched consider this quote, “surprisingly, exploding marine mammal carcasses are relatively common.” This statement was made by Tom Pritchford of the Florida Marine Research Institute. He went on to describe a firsthand experience during a necropsy of a manatee in his lab.

“The animal exploded and its heart flew up, hit the ceiling and then fell to the floor.” Although, I suspect our cooler beach temperatures protect us from such nightmares, I recommend you skirt any carcass by a wide berth lest you become Pescadero’s greatest claim to fame.

Invisible Beach, thanks to its own accumulating features and Neptune’s Vomitorium’s non-buoyant regurgative features has captured and displayed some truly odd creatures at one time or another. None weirder then the day we found the Sea Monster. It was eight feet long, its snakelike body tapering to a pointy end with no sign of a caudal fin. It did seem to have a dorsal fin from what seemed to be its head down to its tip. It was hard to tell though as it was decomposed and roughed up by its journey onto the beach.

I took some pictures of this mystery creature after placing a swim fin next to it for size comparison. Not being in the habit of collecting stinky, rotting corpses, I merely picked up some litter to grab it with, without soiling my hand, and dragged it up the beach above where I estimated the high tide would reach. Check out the two pictures of it I’ve attached. Does it look familiar?

Later that day I got on the Internet and began to research what it might be. My guess was some sort of eel or deep sea fish rarely seen. After hours of searching I headed over to my local library and checked out all the books on sea creature identification I could find and got to reading. Still no success, so it was back to the Internet. Eventually, I very tentatively identified it as an Oarfish, a deep sea creature rarely seen alive at the surface. But the body shape wasn’t quite right. Here’s a Wikipedia entry about this oddity.

“Oarfish are large, greatly elongated, pelagic Lampriform fish comprising the small family Regalecidae.[1] Found in all temperate to tropical oceans yet rarely seen, the oarfish family contains four species in two genera. One of these, the king of herrings (Regalecus glesne), is listed in the Guinness Book of World Records as the longest bony fish alive, at up to 11 metres in length.[citation needed]
“The common name oarfish is presumably in reference to either their highly compressed and elongated bodies or the shape and use of their pelvic fins. The family name Regalecidae is derived from the Latin regalis, meaning “royal”. The occasional beachings of oarfish after storms, and their habit of lingering at the surface when sick or dying, have given oarfish a place in maritime folklore as the probable source of many sea serpent tales.”

Sea Serpent tales?!, I’m thinking this deserves more investigation. So I head back to Invisible Beach with rubber gloves and a big plastic bag and collected my treasure. Taking it to my friend’s house, we laid it out and began an autopsy. What the heck? What seemed to be a mouth visible in the closeup picture of the bigger end wasn’t. In fact, what seemed to be the head had no features I would expect to encounter even if the head had been removed. Curious, I took out a big serrated knife and cut a foot of “head” end off.

What??? No bones, no cartilage, no large internal features at all. Just pinkish-red muscle tissue. It was obvious that this was not an entire creature, but just a fleshy eight foot chunk of something. But, what?

That night I returned to the Internet and my books and found what I believe is the answer. I had the top caudal fin of a thresher shark, a very big thresher shark. Here’s part of the entry from Wikipedia for Thresher sharks.

“Named for and easily recognised by their exceptionally long, thresher-like tail or caudal fins (which account for 1/3 (33%) of their total body length), thresher sharks are active predators; the tail is actually used as a weapon to stun prey. By far the largest of the three species is the Common thresher, Alopias vulpinus, which may reach a length of 20 ft and a weight of 400 Kgs.”

Other experts say they can be 25 feet long, which would seem to be the necessary size of the shark that our chunk of tail would have come from. I hope you enjoyed my tale of a whale and a whale of a tail. John Vonderlin