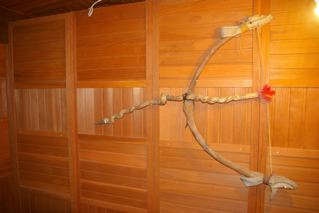 Hi June
In an earlier email I mentioned to you that I collected Naturools. Here’s the story behind my inspiration to begin collecting them.

Skree! The piercing, heart-stopping, blood-curdling cry of the hovering predator– promising impalement on its powerful talons–and the tearing of flesh by the razor sharp edges of its beak. It is no coincidence that in the world of rocks, there is a Rogue Rock, called scree, that is an evil fraternal twin of the rapacious raptor.

The dictionary defines scree as loose rock at the foot of a cliff or steep slope. I call them Fallen Angels, intent on malice to all. Scree– like so many other Rogue Rocks– have strayed from the “Path of Rest.”

Unused to mobility, their impetuous dives from their cliff homes have shattered their bodies and the normal rocks’ placid psyches, leaving them unstable and aggressive, ready to rip the flesh of any organic who trespasses in their domain. Clustered together at the foot of the cliff, with their lynch mob mentality, they wait silently, ready to strike out bloodily.

I suffered just such a vicious attack by these miscreants a few years ago and only barely escaped with my life. I had been picking my way cautiously across a scree slope looking for collectible rocks when my attention was drawn skyward by the screeching cry of a hawk. It was then that the Rogue Rocks attacked.

Several of them tripped me, knocking my feet out from beneath me. While I struggled to regain control, I suffered a cowardly attack to the back of my leg. The ringleader, using one of his sharp edges, opened me up from knee to cheek, as neatly as if a surgeon had used a scalpel. Shocked and bleeding, I fled for my life.

Reaching my truck without further attack, I dug out my trusty roll of duct tape, pulled the gaping wound closed and barber-poled my leg with it.

Calming my nerves with a can of liquid bread, I drove for help. Three hours of driving to the Emergency Ward, 15 stitches and 17 staples, along with a half hour of a Physician’s Assistant’s time, and I was on the Road to Recovery, the proud owner of a nearly $2,000 bill. It was an expensive, painful, yet illuminating lesson.

Illuminating, because I realized that many hundreds of thousands of years ago some proto-human had learned a similar lesson when the evil scree attacked them.

Applying the knowledge learned from the School of Hard Rocks, this early hominid changed the prospects of its species. The concept of sharpness was born. Until Kanzi, the famous flintknapping Bonobo Chimpanzee, displayed this awareness recently, no other species but ours or our closest relatives had ever done so. This first discoverer, grasping the concept, could select and pick up naturally sharp rocks, created when they fell from the cliff above and smashed into each other, and duplicate in others the damage it had suffered.

My “discoverer” of the sharp rock also had a tool that would allow him to cut big chunks of meat from a temporarily unguarded predator’s kill and scurry off to eat it in safety. This new tool augmented the power of his teeth in battle or defense. Forget that ape waving a thigh bone in the famous opening scenes of 2001: A Space Odyssey. Meeting that bully at the waterhole, all “my discoverer” needed to do was duck under the ape’s clumsy swing, close in and rip that sucker from stem to stern.

There is reason to believe that long before the first stone tool was manufactured, early hominids gathered and used a wide variety of naturally occurring tools or Naturools as I call them. Naturools pointed the way towards technology for those early primates. Their usage demonstrated the power of sharp rocks–and when demand outstripped supply, necessity proved to be the “Mother Of Invention” and toolmaking began.

Naturools, provided the templates for the first manufactured stone tools, those of the Olduwan Tradition.

Unfortunately, this unholy marriage between crazed Rogue Rocks and bloodthirsty proto-humans unleashed a flood of violence that quickly led to their dominance over all the other species in the world. You might say, “It was only Naturools.”

If you’ve never heard of Naturools before, embarrassment might be the reason. In the 19th century such stones were asserted to be the product of human tool-making and were called Eoliths or Dawnstones.

They were later used as part of the proof in perhaps the most spectacular and long-lasting archaeological hoax ever: the infamous “Piltdown Man.” (Eonthropus dawsoni.) This part modern human–part orangatun fossil was “found” in 1912 by Charles Dawson, “The Wizard of Sussex,” and wasn’t conclusively revealed as a hoax until 1953. Clarence Darrow even used its existence as part of his defense in the Scopes Monkey Trial. Oops.

To this day at “The Calico Early Man Archaeological Site,” 15 miles east of Barstow in the Mojave Desert researchers use the nearly 60,000 Eoliths they claim to have found to try to prove man’s existence in the New World nearly 200,000 years ago.

In the spirit of these cutting-edge Seekers of Truth, I’d like to share some pictures of a Naturool artifact I found. I believe this is possibly the earliest example ever found of a bow- and- arrow probably made by a now extinct tribe that might have lived in the Shmoo Rift Valley. For the life of me I can’t figure out why such a technologically advanced group is extinct, but evolution works in mysterious ways.

Lastly, for those who can’t place where they have seen the word “Skree,” before, I’d remind them that it was probably in a comic book they had read. It is the customary word for the sound raptors or raptor-like characters use. If you Wikipedia, “speech bubbles or balloons” you’ll get a good rundown on the history of the conventions employed by cartoonists of which “Skree or Skreeee!” is one, along with its more famous fraternal triplet cousins, BIF!! BAM! and POW!.

Better yet, Wikipedia The Lexicon of Comicana” and amaze your friends by explaining what the terms grawlixes(%@&#!), plewds, briffits, squeans, agitrons and many more mean. You’ll be amazed how much you already know about this subject without realizing it. Enjoy. John Vonderlin