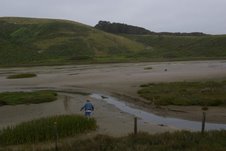 Stuck! At least it sure seemed like my feet were. Every time I tried to pull one of them out of the sticky, seemingly bottomless mud of the Pescadero Preserve’s mudflats, the other one sank deeper.

Fearful thoughts of a personal replay of the long, suspense-filled quicksand scenes, so popular in the Western movies I loved to watch as a child, oozed into my mind and sank to the pit of my stomach.

Quickly those turbid thoughts were piggybacked by equally unpleasant considerations of the possibility of a helicopter having to be dispatched from Half Moon Bay to ingloriously pluck me from my muddy cocoon, sans shoes and pants; with complete uncoverage on the evening news.

For months every time I had driven by the Pescadero Marsh on Highway 1, the abandoned tires had taunted me: A pair of them, that even at 65MPH, irresistibly drew my gaze like melanomic moles on the face of a supermodel. I hated them, but I wanted them bad.

I was only up to the low forties and although I had a stash of tires on the beach at Tunitas, I wasn’t looking forward to humping them up that hellish hill with its two- steps-forward-one-step-back loose dirt path. Besides, with the general modus operandi of the project being to photograph them wherever I found them, with beautiful scenery in the background, then remove them, I didn’t want too many repetitious shots.

I had considered kayaking out to them, fastening a long rope to them, and pulling them in hand over hand. But, the draft of my kayak would have forced me to pole my way to them. Something I knew from my childhood homemade rafting experiences might leave me hanging on my stuck pole as my kayak floated away.

Besides, hauling in hundreds of feet of mud-encased rope was not a task I ( or my car) was looking forward to. So I watched and waited as the lagoon’s waters dropped through the summer. Finally, it looked possible and I began my expedition. Which is why I found myself stuck almost up to my knees in the muck, slowly sinking, with no obvious solution to my problem.

The answer was contained in that old aphorism, “Two (blanks) are better then one.”

I don’t mean somebody else as stupid as I came to try to rescue me. That would fall under a different saying, “Misery loves company,” But, rather two sets of appendages stuck in the mud is better then one. By pressing both palms into the mud I was able to free one leg, find a slightly firmer spot for it and repeat the process until I had moved back to firmer ground.

I’ve attached a couple of photos a friend took of my adventure. Fortunately, they were not familiar enough with my camera to work the telephoto zoom giving me the chance to deny that the fool in the mud was me if asked.

Alas, humbled by my experience, I continued my dithering instead of getting to the slithering and some enterprising poachers, I mean do-gooders, swiped my intendeds a few weeks later by using boards and a roll of some kind of material. Enjoy. John Vonderlin