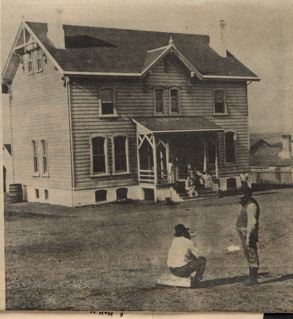 [Photo: The Keeper of the Lighthouse and his family and an assistant resided in this comfortable home at Pigeon Point light station built before the turn of the century. The sum of $12,000 was appropriated for the structure.]

“Novice” was the pen name of a restless South Coastside woman who joked in 1873 that “she would rather spend a whole week driving and sightseeing than in the wash-tub.”

(By driving, she meant via horse and carriage.)

When heavy winter storms kept the San Gregorio writer housebound, she couldn’t wait to get back on the road. And the moment there was a break in the weather, “Novice” was ready for an adventure on the South Coast–an adventure that would end up as a story she would mail for publication in the San Mateo County newspaper.

I’m ready, she said, looking at the gloomy gray sky “to drink any amount of salt air and stray bits of scenery.”

She invited friends to accompany her on the bumpy carriage ride, and the party arrived in Pescadero at 9 a.m.–but they didn’t remain long in the popular seaside resort. After a “vote,” she and her friends decided “to do” the Pigeon Point Lighthouse. A month earlier the new lighthouse had celebrated its first anniversary.

Surely when Novice and her pals arrived at the new landmark, they knew the back story; they had heard the gossip about the nasty legal battle over the nearby busy wharf (the only wharf for miles.)
Here are the juicy details: For a decade, Loren Coburn, the controversial landowner and world-class litigant, had leased the wharf to several ex-San Mateo County officials. They then modernized the primitive facilities making it possible for small steamers to load and unload local produce and supplies in a few hours instead of the usual two days.

Well, the lease had expired and now that the former county officials had made the improvements, they didn’t want to give up the property. They refused to honor the contract and the legal dispute landed in the courts.

In the meantime, there had been unfriendly confrontations and threats of violence. (For more details, read my “Coburn Mystery.”

But things were quite when “Novice” toured the grounds surrounding the slender white finger in the sky, the Pigeon Point Lighthouse. Her head was turned by the presence of a photographer whom she called “a special artist.”

She said he was using every “standpoint” to shoot photographs. “If I had not been under the impression,” she noted, “that I was looking worse for the trip, I would have stationed myself in range of that laugh-inspiring machine.”

There is a photograph of the lighthouse keeper’s dwelling in Frank A. Perry’s “The History of Pigeon Point Lighthouse.” Two bearded men stand talking in the foreground. In the background several women wearing long dresses are sitting on the porch. The photo is credited to Eadweard Muybridge, the famous San Francisco photographer who pushed the limits of his craft.

While working for the U.S. Lighthouse Service in the early 1870s, Muybridge took spectacular photos of lighthouses and dramatic ocean scenes in Northern California. He shot the first panoramic views of San Francisco and has left behind breathtaking landscapes of Yosemite.

In 1873, the year I am writing about, Leland Stanford--the founder, along with wife, Jane, of Stanford University–called on Muybridge to take a picture of Occident, his beautiful horse, while trotting at full speed at his Palo Alto stock farm.

At the time no photographer had accomplished the feat of photographing an animal in motion, like a Thoroughbred trotting. But Eadweard Muybridge did it and Stanford, who also enjoyed pushing the envelope, financed further experimentation. This led to the use of an “electrically activated slide shutter” and Muybridge’s revolutionary images of “The Horse in Motion” and “Animals in Motion.”

The Muybridge-Stanford collaboration is credited with giving birth to the “motion picture.”

I believe it was Eadweard Muybridge that the South Coast writer “Novice” encountered on that day in 1873 at Pigeon Point lighthouse.

Unfortunately, Novice could not tell her readers who it was because she discovered, to her embarrassment, that she had left behind pen and paper–and would have to rely on “head notes” to write her story.

She didn’t have time to dwell on her mistake as a knowledgeable U.S. Lighthouse Service guide whisked her away on a tour of the 100-foot tall edifice, “a gigantic tower that was big at the bottom, little at the top, and something in the middle goes whippety whop…” The oil fuel for the giant lamp was manufactured from lard, Novice said, and there were four immense wicks.

As she ascended the serpentine height, Novice learned that the light was composed of 24 lenses which emitted a flash every ten seconds. Although the Pigeon Point Lighthouse was only 12 months old, the transplanted beacon had played a role in the devastating Civil War fought a decade earlier.

“The beacon was captured,” noted the South Coast writer, ” by the Confederate soldiers at Cape Hatteras during the Rebellion and afterwards recaptured by the ‘Boys in Blue’.”

From her vantage point at the top of the tower, Novice enjoyed “a perfect panoramic view of the ocean, with the white-capped breakers dashing against the rocky shore, and all the busy workings of the toilers of the sea.” She found it all terribly romantic.

The tour ended and Novice and friends headed north to Pescadero’s celebrated Pebble Beach. Arriving about noon, the party crunched the soles of their shoes on the shiny pebbles and spread out a delicious homemade lunch on the beach blanket. A steaming pot of tea hung over the campfire.

Afterwards they “hurried off to fill our stachels with diamonds and all sorts of precious stones that we expected to find.” The pickings were slim and Novice admitted that “like the rolling stone that gathers no moss, we had neither moss nor pebbles.”

South Coast photographer/filmmaker Susan Friedman has published Equus…Horses at Rest and in Motion, a nod to the work of Eadweard Muybridge.