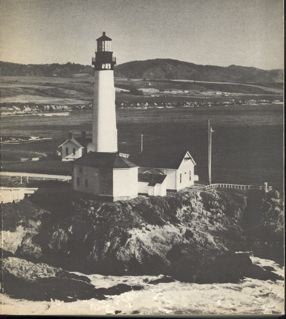 “First illuminated on November 15, 1872, this lighthouse was named for the clipper ship, Carrier Pigeon, that hit the rocks here on May 6, 1853. The tower, 115 feet in height and 28 feet in diameter, is constructed of bricks shipped around Cape Horn from Norfolk, Virginia. The light’s 9-foot diameter fresnel lens was built by Henri Le Paute of Paris in the 1850s. 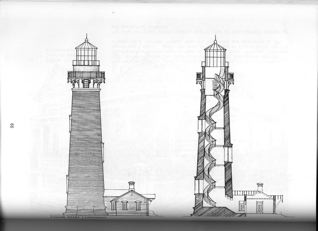 “Illumination for the light first came from whale oil. Kerosene was later substituted, and then electricity to run the light, which is magnified to 800,000 candlepower in a beam seen 18 miles at sea. In 1974, an automatic beacon was set up on a platform outside the lighthouse, replacing the historic lens. The lighthouse is a State Historical Landmark, and is listed in the National Register of Historic Places and the Historic American Building Survey.”