A “P.S.” From John Vonderlin is NEVER Ordinary….

I went to Tunitas today and gathered up 22 tires 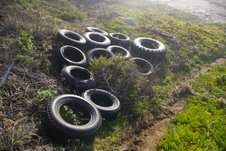 for future carrying up the hill when the ground dries up. I’ve got 12 of them poised at the bottom of the path. With those, in one fell swoop, I’ll be able to skip the Sixties, since I’m at 58 now. (For some reason I found that amusing.)

There was also a young woman doing some beach art I thought was poignant. She was using pretty seashells to create “True Love” in the sand. Alas, when the tide came in it will suffer the same fate its namesake usually does. 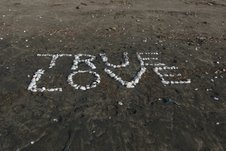 I talked with an oldtimer who was stuck on top of the hill, unable to find the easy route down that he remembered from 25 years ago. He told me there used to be an arch at the southern end of the beach. (Where the concretions and sea cave I wrote about are.) I looked on the 1972 photo from CCRP and he was right. Oddly, Meg had gone to a bookstore in Santa Cruz today and bought a book she’d been talking about filled with historic photos of the Santa Cruz area. It featured Natural Arches Beach and all the arches that have collapsed through the years. She wondered if new ones are being created to replace the lost ones. Or are they gone forever I’m not sure, but I assume there must be new arches growing somewhere. But where?