[While this original draft may be messy, it does contain more details and research than the edited version.]
By June Morrall

The Steeles moved from Ohio to California in 1855, first farming in Marin and Sonoma County. Seven years later the Steeles were forced to move when the Point Reyes property they rented was sold to new owners.

Then they heard that Loren Coburn, the San Francisco stableman and San Mateo County landowner, was looking for someone to lease his property at Ano Nuevo. Originally a deal was struck where Renneslear (“RE”), Issac (“IC”) and Edgar Steele rented the Ano Nuevo land for ten years. But by 1864 they owned it! [I believe what happened is that Loren needed cash up front for another project and the Steeles had the money.]

Besides dairying, the Steele brothers raised stock and cultivated grain. They built lovely homes for themselves at Ano Nuevo and at the famous Cascade Dairy. During the Civil War, Edgar produced a gargantuan cheese weighing one ton and donated it to the U.S. Sanitary Commission, forerunner of the Red Cross.

The Steeles had a personal reason for producing the giant dairy product: General Frederick Steele, who fought in the Civil War, was a close relative.

Steele Brothers Dairies: In 1862, Rensselaer Steele and his three cousins established a chain of dairies between Gazos Creek and Ano Nuevo known as the Steele Brothers Dairies which became famous throughout the Bay Area for their products. A number of houses and barns still stand which were constructed by the family. The dairies are listed as a California State Landmark.

Cascade Ranch House: Built in the mid-1860s for Rensselaer and Clara Steele, the building is constructed in a classical form with a symmetrical placement of windows and doors, and is the most elegant of the buildings. A wide veranda with a balcony on the second floor runs along the front and both sides of the house. Alterations made to the house over the years have not destroyed its distinctive coastal character.

Cascade Ranch Dairy: This three-story redwood structure was the first erected by the Steeles after their location on the Coastside in 1862. The building was designed for function rather than style, which may explain the irregular placement of its windows. A wide band, or fascia, just under the eaves was the builder’s only architectural embellishment. 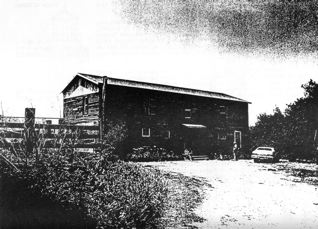