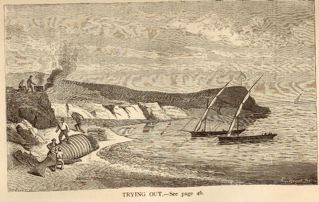 The wharf and a small port community grew up at Pigeon Point Landing before construction of the lighthouse. A warehouse, cheese factory and a post office were built. On one of the bluffs, Portuguese whalers, and their families, who had migrated from the drought ridden Azore Islands, lived in a dozen rustic cottages on one of the bluffs

During the whaling season, looking through binoculars at the sea was a full time job. When one whale or a school of whales was spotted near Pigeon Point, the whalers got into two small sailing vessels to chase their prey. If they were lucky, they shot the whale dead with four to six “bombs,” a harpoon filled with poison. The dead whale was towed to shore, the carcss stripped of its fat. Then the blubber was processed into a valuable oil in try pots which sat in simple furnaces made of rocks and clay.

The Pigeon Point whalers didn’t waste a thing, cleaning and selling the bones as well. Barrels of whale oil were loaded onto the steamers that stopped at Pigeon Point.

In the end, the business of whaling was not profitable and the whalers abandoned Pigeon Point. The high expense of getting the oil to market, the low wholesale prices–but most of all the fact that the whales were being harpooned into extinction brought the curtain down. From time to time, whaling was revived but utimately the market brought it down. Some of the Portuguese whalers relocated to Pescadero where they were absorbed into other occupations.

The primitive loading arrangement at Pigeon Point took two and a half days to complete. Perishable items waited hours to be loaded. A small vessel rounded the reef and dropped anchor in the sem-sheltered cove. A heavy wire cable was stretched from the top of the bluff to the large rock monument some 200 yards from shore, and under the hawser, rising to a level with the steep rock bluff which half enclosed the bay.

Slings running down in the hawser were rigged and the cargo was lifted from the vessel’s deck, a tedious task, load by load, and run up into the air 50 to 100 feet– hauled to shore and landed on top of the bluff.

The process reversed itself when lumber, bales of hay, fruit, potatoes, vegetables and dairy products on the bluff were strung up on the cable and the shipment slid across the wire onto an awaiting schooner. All went well unless a southwest wind kicked up.

Then the vessel slipped her anchor and ran out to sea until the wind blew itself out.

***The Portuguese whalers practiced the ancient form of whaling, chasing humpback and gray whales in long boats, shooting at them with homemade poison filled harpoons, towing the carcasses back to the beach where they processed the blubber into oil.

The whalers held equal shares in the business and in the early years the work was profitable–but as time passed, whaling didn’t yield a steady income. Ideally, they needed calm weather and a good supply of whales; they had neither at Pigeon Point.

The unpredictable weather, fewer whales and the high cost of shipping the oil to market turned it into a very risky business.