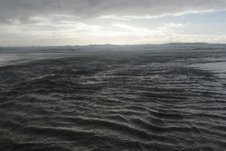 Arriving at San Gregorio Beach Park, I could see getting across the creek was going to present a challenge. A large lagoon had formed and it was draining vigorously. The water, running into the ocean, a turbid, brown color from its sediment load, was forming standing waves a foot tall just above the area where it made its racing entrance into the ocean.

Using the slightly shallower water, where the creek had fanned out to its widest, readying itself to joust with the incoming waves, I was able to cross by facing the current and crab-walking sideways with short but rapid steps. 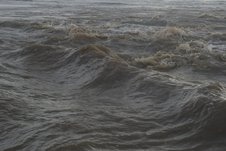 The speed with which the powerful current washed sand from beneath my feet messed with my balance, causing me to move quickly to avoid being knocked over. Still, the current pushed water up against my leg, topping and instantly filling my knee- high boots.

A shaky but successful trip was accomplished in moments, and I was in virgin territory, but with my Seven League Boots reduced to anchors.

Having struggled to semi-successfully cross, I found the rewards were not as I had hoped for, let alone risked for. I did get pictures of the peculiar and unprepossessing arch that is in the cliff at the far south end of the beach.. A yawner, but a necessary addition to my Sea Arches of San Mateo County Coast list, as it is a young arch with rapid growth potential because of its orientation to the waves.

Better yet was the fact that I got some nice pictures of the San Gregorio bridge, its image crisply mirrored in the lagoon. I was mildly irritated that my shots and this site were marred by a bold, but obnoxious graffiti moniker that emblazoned one support column, screaming for attention. 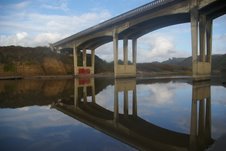 Wading back to the north side of the creek I collected three tires, all still mounted on their wheels, just lazying about on the beach. That added #60, #61, and #62 to my “101 Tires” project. The picture of Number 61, was shot from where I found the tire in front of one of the driftwood beach sculptures dotting the beach, It’s an interesting contrast of two extremely different manmade objects, the tire and the teepee. 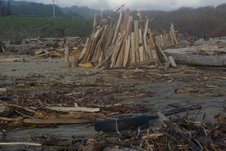 With that it was time to head home and batten down the hatches before the predicted monster storm arrived on Saturday. Enjoy. John

P.S. Apparently, the graffiti received some attention this weekend, though not what the artist-vandal hoped for. When I stopped by on Monday to check if the disappointing so-called Monster Storm (that didn’t live up to its name) had brought anything new to the beach. I discovered the “Guerilla Graffiti” folks have started covering up this artistic lesion on the public’s viewscape. I like the way they try to blend the paint-over into the background. Kudos to them. Enjoy. John