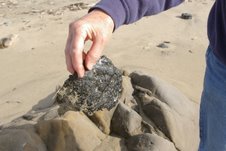 Hi June,
I was delighted earlier this week when I found a few tar balls on the beaches from Pescadero to the Santa Cruz county line.

Delighted, not because I like seeing these sticky bits of goo fouling the beach, but rather because I needed a fresh supply to use in updating one of my artplay projects: “Beach 2100.”

To refresh your memory, “Beach 2100” is comprised of an oil drip pan laden with hundreds of tar balls all melted together. I have gathered these in three other tar ball incidents that have occurred on the San Mateo Coast in the last four years. Into this little mini-La Brea Tar Pit, I have stuck hundreds of small children’s toy-related items that have been coughed up by Neptune’s Vomitorium, or washed ashore on other of our beaches. I’ve amused myself by creating thematic areas, secret messages, or symbolic juxtapositioning of the objects.) 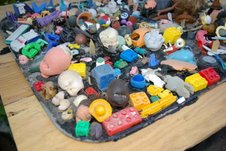 The “Beach 2100” title is meant to convey the possibility that if we don’t gain control of the enormous amounts of litter finding its way into our oceans, in a hundred years our nation’s children may encounter something as noxious as this piece portrays.

With time the volatile elements of the tar balls I had previously gathered evaporated, leaving a hard substance (asphaltum) that makes it difficult to stick my newest finds in the always growing collage. Which is why I was happy to find these fresh gooey newbies.

As I was driving home I heard on the radio, that there were tar balls washing ashore on Pacifica beaches, alarming beachgoers and authorities alike.

The radio announcer theorized they were from the Cosco Busan, last year’s Boogie Man. Having made the mistake of picking up a plastic bottle that became coated with the noxious remnants of the bunker fuel that leaked from the Cosco Busan, I knew that this was a disservice to these friendly little patties that were coming to visit our shores once again, probably from their Monterey Submarine Canyon home. I

Next day it got even nuttier when beaches were closed for public safety while a cleanup was conducted. When I heard that even volunteers who had undergone the needless training for Cosco Busan, weren’t being allowed to pick up the tar balls unless they had a new training session for this “spill” I was bemused. My mind conjured up visions of people speeding along Highway 1, cigarette in hand, talking on their handheld cell phones, as they commiserated on the deadly danger of these toxic monstrosities, and the necessity of preventing the foolish public from hurting themselves.

My guess is more toxic and varied poisons were spewed from the tail pipes or dripped from the engines of the cars people used to drive to the training sessions then washed ashore.

Still, if there is a properly trained bureaucrat somewhere who has spare time they can climb down the extremely slick and steep hill above Tunitas Beach and carry up the twenty-five pounds of tar balls I gathered yesterday off the beach.

I didn’t need that much so I left most of them in plastic bags at the bottom. While they’re there, they can also carry up the tires, also composed of many toxic chemicals, that I gathered from the beach and stacked there. There are now 14 by the tar and 17 more I’ve placed up the bank at various places along the beach.

Having grumped enough about bureaucratic overkill, I’d now like to relate the interesting history of these little Natural Wonders and their important place in California history. Much of the following information comes from a thin book entitled, “California Indians, Artisans of OIl,” put out by the State of California, Conservation Division.

Pedro Fages, one of Portola’s companions when his expedition made the European discovery of the Bay Area, gives us one of our first written mentions of oil seeps in California. He writes, “at a distance of two leagues from this Mission (San Luis Obispo) there are as many as eight springs of bitumen or thick black resin that the natives call chapopotle; it is used chiefly by them for caulking their small watercraft and tarring the vases and pitchers the women make for holding water.”

Actually, the Indians used oil from natural seeps for a wide variety of utilitarian, symbolic, and decorative purposes. Its value was so great that they traded the liquid oil and hand-formed (gasp!) cakes of asphaltum (dried, hard oil) to those living further away. Besides its multiple-waterproofing uses, its adhesive qualities were valued. One of the most interesting ones mentioned was that Indian women would use it to fasten woven cones, sometimes worn out baskets with their bottoms removed, to the top of their mortars or grinding holes to keep the ground up acorns or seeds from escaping.

The tar, particularly in its asphaltum state, assisted in adhering stone tools from arrowheads to axes to their shafts. It protected the joints from water or other liquids that might loosen the sinews that fastened them, as well as provided added strength. One exception was in making war arrows, they would use a still-pliable tar, so that the projectile point would be more likely to be loosened by blood and body heat, tearing free from the shaft when someone attempted to remove it, leaving the point still embedded.

Another bit of less malignant cleverness was the method of waterproofing the inside of water containers. The Indians put pieces of asphaltum and hot round pebbles in the basket or vase. Holding it in the heat above a low fire they would swirl it around. The heat melted the asphaltum and the whirling pebbles would press the goo between the fibers. The asphalt-coated pebbles are sometimes found in middens (refuse mounds) near village sites.

The tar’s adhesive properties were also frequently used to cement seashells or other objects to various items for decoration. It was also used to facially mark those in the yearlong mourning state that was common to the tribes. Even a form of ritualistic embalming using gooey tar was sometimes practiced. Filling half of black walnut shells with asphaltum, then embedding various numbers of small abalone chips was a handy way to create the dice used in some Indian games. Lastly as mentioned by Pedro Fages, the asphaltum, allowed the Indians to make planks scavenged from driftwood into very serviceable watercraft, including boats that were sturdy enough to paddle to the Channel Islands, far offshore, for trading or fishing.

I wonder what these people would have thought about closing a beach and requiring expensive auxiliary training for gathering them when a few tar balls washed ashore?

The underwater seep, probably located in the Monterey Bay Submarine Canyon, that ejected the tar balls that washed up on our beaches is just one of several thousand off the California Coast. And not a particularly big one when compared to the intensely studied seepage area that lies off Coal Oil Point, in Santa Barbara County. 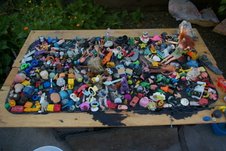 Releases from these seeps vary from an estimated 11 to 160 barrels (450 to 6,700 gallons) of oil per day, along with a large volume of natural gas. At Mobil’s innovative Coal Oil Point sea floor containment project (a large concrete structure placed over a large seep on the seafloor), over 1 million cubic feet of natural gas is collected each day. If you are interested in learning more about these seeps and the sealife communities that have adapted to and in some cases depend on them checkout this website, click here

If you want to visit a coastal oil or tar seep there is one near Duxbury Point in Marin County. There is also the historically famous one at the Tar Pits Park at Carpinteria State Beach in Santa Barbara. You can see that at California Coastal Records Project Picture #7999, or #7231120 amongst others. Or visit this website, click here Enjoy. John Vonderlin

This entry was posted in John Vonderlin, Tarballs. Bookmark the permalink.