This is How John Vonderlin Has Fun at the Beach….

John Vonderlin Tells Us How He Has Fun At The Beach

I had so much fun on the Palmer Gulch trip, I thought I should fully chronicle the rest of my half day at the beach. 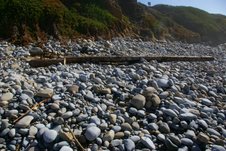 I started out by sawing through a large “telephone pole” beached at Pescadero Beach. I really wanted the pole for my “Battering Ram” display. 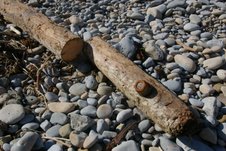 While I usually like poles that are oozing lots of creosote, it was hard to resist this one, because of the giant Frankenstein-like nut and bolt protruding from it, near one end. Creosote is important because it confers extreme long life to these brutes, allowing them to pound the vulnerable life clinging to the reef and shore rocks millions of times before they splinter into harmless pieces, as well as leaving a daub of their toxic load every time they do.

After hand-sawing through it, I discovered the five- foot- long piece weighed nearly 200 pounds. While I was sure I could have lugged it across the rocks and up the stairs with “Rubber tree/ant” persistence, I would have been fit for nothing but a hot tub the rest of the day. Wanting to visit the Palmer Gulch Trestle, a fair challenge in its own right, I settled with oomphing it up the rocks to the cliff’s base, where it should be safe for a while. 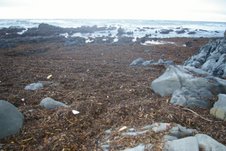 I also collected tire #59 for my “101 Tire” project. A fine whitewall, captured just before it split in half and became uncountable. Yes, even whacky projects need rules that must be adhered to.

After that I headed for San Gregorio Beach and the Palmer Gulch trestle described in an earlier post. Besides what I mentioned in that post, there are a few other things I’d like to tell you about now.

(1) Anyone who’s looking for some firewood might check out the stretch north of the parking lot at San Gregorio Beach. For a half mile a huge raft of wood, much of it evidencing chain saw work, was spread along the beach.

(2) There were also eight tires, all of which will probably eventually end up at a more accessible beach to the south. At least they will have to if they want to become part of my “artplay.”

I collected one small, almost brand new, smooth, fine-line incised tread, ten- inch tire, with a fancy rim and bearing mount. Though it was too small to join its full-grown, recovered brethren, as part of “101 Tires,” I was curious as to what it was used on. After quite a bit of Internet searching, I discovered it was from a “GoPed,” those irksome, noisy motorized scooters teenagers buzz around my neighborhood on occasionally. How something like that ended up in the middle of nowhere, in such perfect shape, escapes me.

(But, there have been enough disturbed afternoons in my hood to cause an irritating-noise fueled vision of a lemming-like swan dive off the San Gregorio cliffs to flit through my mind as a momentary hope. However, that seems unlikely, as well as curmudgeonly.)

Having started the day at 1 p.m. it was getting late by the time we got back to the parking lot. One of the new Game Wardens was there and he came over to chat with us. I had told him about your blogs during my first encounter with him a few weeks ago and he wanted to know where the W.W.II observation tunnel was. He followed us to the parking spot closest to the path near it, and vowed he was going to visit it on his day off. Perhaps, he can find out something about its history.

With just a little time left before dark, we decided to take a quick jaunt to Invisible Beach. It has been non-productive for months, but the return of the wrack and the marine debris are unpredictable and mysterious, so we have to keep looking. It’s not like a sunset walk down a beautiful beach is a great sacrifice. In this case it was… Jackpot!

Neptune’s Vomitorium was covered with a thick layer of seaweed and a moderate amount of debris. It will take a few high tides to drive it all up the beach in a huge pile, but it’s returned! 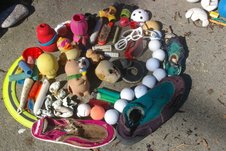 Golf balls, toys, kayak shoes, fishing line balls, and a slew of other things were interspersed in the wrack. I’ve attached a picture of the more interesting (to me) items we quickly collected. It was a sweet, thick layer of frosting on a truly delicious day. I hope to return with large bags on Monday, a day predicted to be wonderfully sun and mild-temped, and haul all the booty away. Does it get any better then this? Enjoy. John