Lately there’s been a great increase in the number of small black plastic tubes washing up on our local beaches. I call them “The Tubes of Mystery,” because most people, even veteran beachcombers, fisherfolk, and marine scientists have no idea where they come from or what they were used for.

I started calling them “The Tubes of Mystery” after reading a (2001) online story from the Honolulu Advertiser. The author of the article sought answers: What was their use, where did they come from and how did they end up in the ocean?

The newspaper’s readers responded with posts; one person suggested that aliens must be involved. While that could prove to be true, in a limited way, here in California, I believe that the ways of nature had more to do with the tubes ending up in the water than the possibility U.F.O.s might be sprinkling them all over the Pacific Ocean.

Fortunately, many of the Advertiser’s readers and posters were more knowledgeable than the one UFO proponent, and informed the Hawaii newspaper that the “mysterious tubes” were oyster rack spacers.

Oyster rack spacers are strung on a wire, alternating with drilled shells to keep them apart, then hung from a frame in shallow water. Clumps of oysters are grown on the shells, properly spaced for the best health and production of the bed.

In Hawaii, it was the longer, thinner, sometimes colored tubes used in Japanese oyster farms that were found. The typhoons set the tubes free. The North Pacific Sub-Tropical Gyre then delivered them to the islands. While I also find a number of those tubes, the majority of the ones I find are from good ole’ American and Bay Area oyster farms. They’re usually of shorter length, cut from half inch black poly-pipe.

Here’s my theory: I suspect that the powerful storm that blasted us on Jan. 4th did lots of damage to the oyster farms in Tomales Bay, Drake’s Estero and other nearby waters, setting free the bonanza of “The Tubes of Mystery.”

This picture of the debris 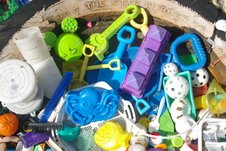 I collected on Monday from Tunitas Creek Beach demonstrates that the tubes weren’t the only things caught up in our recent storms. I set a one- day record of a dozen sand toys; shovels, a rake, a sifter, and a nice assortment of sand molds, including one for forming parapets on my next sand castle. 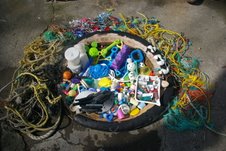 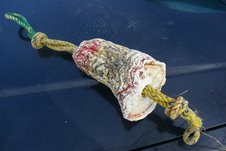 There was also a record number of plastic bottle caps and balloon remnants, many still tethered by colorful ribbons, only wrapped up in strands of kelp rather then the hands of excited children. 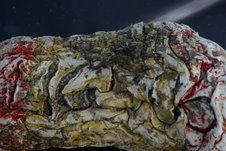 Oddly, I found five more fish tags from “The Contender,” a boat that sank years ago and whose fish tags figured in the solution to the mystery of Neptune’s Vomitorium

Lastly, I found a very rare “Shrunken Head Buoy.” I believe boat fires are the cause of these shriveled floats. Unfortunately, I can’t read the whole name on this one or I might be able to check its provenance. I think it starts with L.I.G., but can’t be sure. Anybody, have any ideas? Enjoy. John Vonderlin