After the cemetery tour, and our visit to “The Gravel Quarry,” we headed down to Ano Nuevo for a hike. My main purpose was to photograph the most southerly sea arch in San Mateo County.

It’s located at the northern limit of Cove Beach, a popular surfing spot at the south end of the park. You can access the cove by paying $6 to park at the State Park parking lot and taking a fairly boring hike along with all the other tourist families, or you can park for free about a half- mile south of the Park alongside Highway 1, and hike along the old access road, over the old bridge, and down the New Year’s Creek path to the beach and head north. (CCRP Picture # 200506697)

With breeding season over, most of the adult male Elephant Seals have left. But, there was one lone male sunning himself 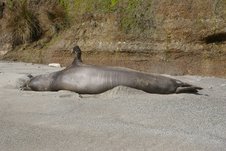 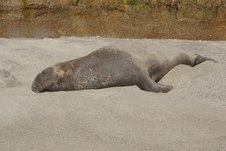 on the beach as I headed towards the arch. He looked so relaxed, I approached to within the legal distance of 25 feet, a bit closer then I recommend, and got some good photos.

Unfortunately the tide was in, so I didn’t get the close-up photo of San Mateo’s most southerly arch that I was aiming for. But it’s not that impressive anyway. 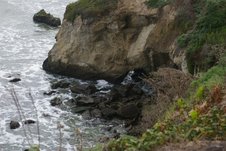 It is, however, the only arch of a series of arches that you can walk through, and that are hidden in this south- facing- part of Ano Nuevo Point.

When the seals are gone I’ll kayak along this stretch, and inventory, and photograph all of them. Though I can’t be sure just how many there are despite studying the California Coastal Records Project (CCRP) pictures. 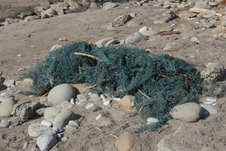 embedded in the sand. It seemed to be a part of the net I recovered on my last trip to this area. This time, without the tools to cut the net up, I just had to leave it for another time.

I also photographed the nearby “Elliot Falls,” 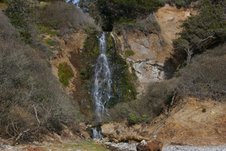 the second most southerly, and perhaps the most picturesque of all the oceanfront waterfalls in San Mateo County. (CCRP # 200506703)

Then it was into the Park, to take that boring walk I mentioned.

At the Ranger Assembly area, where the guided tours to the Elephant Seal rookeries begin, there is a side path to a viewpoint on the bluff-top, I knew a small sea arch was visible from there, having studied the CCRP pictures. It turned out to be a fairly rare double arch, perhaps the only one in San Mateo County. 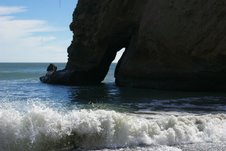 Unfortunately, the picture doesn’t really show the double arch. I could only be sure it was a double arch, because, when the waves moved through the arch-opening, they also surged out of its nearly submerged smaller companion. (CCRP # 200506688)

With the sky clouding up, and the seemingly perpetual cold wind that blows out on the point gaining force, we called it a day. Another small slice of the amazing San Mateo Coast caught in both my camera’s SD card and my wetware memory bank. Enjoy. John

This entry was posted in Coastside Arches, John Vonderlin. Bookmark the permalink.