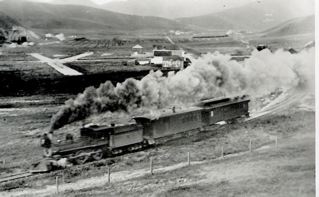 Mr. Vonderlin, I’ve enjoyed reading Half Moon Bay Memories and El Granada Observer as well as your Pescadero Memories, particularly references to the OSRR, which I became acquainted with in the late 1920s.

My uncle took my brother and me on a hike along the right-of-way from Thornton to Mussel Rock. Though the rails had been torn up, still it was obvious a railroad had been there.

In 1939 I made several bike trips down the coast from San Francisco, once climbing to the top of the collapsed tunnel at Pedro Point to view the grade south to Devil’s Slide. And I also drove to Santa Cruz in a friend’s Model A Ford, borrowed from his brother, always looking for OSRR remnants.

At Pescadero beach it looked like grading of the dunes had been done south of the “mysterious tunnel” bluff you described. On a much later visit I found the tunnel portal, and since the grading I’d seen earlier would have led to the tunnel site, I surmised that the OSRR had built the tunnel either as a pilot bore, or to use it to blow down the hillside for easier grading.

Your north portal pictures puzzle me as they don’t appear to coincide with this surmise. I’ve never seen anything about this in the OSRR literature.

Re the Palmer Gulch Trestle: I have a photo of it given to me in 1939 that shows the trestle had already started to sag in the middle. About 1960 a friend and I hiked down to it; by then it was sagging noticeably. On the north side was a large, weathered (tool?) box, about 12’x4’x4′ roughly. It had an old padlock on it which we left as is.

We walked across the trestle, and my friend took pictures, of which I have a couple. Unfortunately, they are now badly faded (Polaroid camera?). but the rotted ties are still evident. I don’t believe it burned down because I saw an internet picture of it taken a few years after our crossing, and it was in nearly collapsed condition, and the text said it totally collapsed shortly after. Regrettably I didn’t add it to my OSRR “favorites,” and have never found it on the Web again.
Thanks again for your interesting memories of the San Mateo coastside.

Hi June,
I received this interesting email today. It reminded me the tunnel (s) story is not a mystery solved. I’ll get back to it. The gentleman from the cemetery has said he’ll show us it, so maybe it exists. I sent Angelo a picture of a burnt timber, though that might have happened after collapse. I loved that he lives in Sebastopol. I used to have a wonderful ranch/family orchard in the hills west of town during the Seventies. George Lichty, the cartoonist of “Grin and Bear It,” fame lived across the street. The Thomases who owned the American Opinion Bookstore (John Birch Society–remember them?) were at one corner, two gay interior designers from S.F. on another and a schoolteacher couple who were Sufis on another. A great time in my life to recall. Where has my youth gone?
Larry Fitterer and I are going to be lowering ourselves down the cliffs into “The Notch” and Acid Beach on April 9th or 10th. Yee-Haw. Hopefully, I won’t break my typing fingers or anything else. Enjoy. John

This entry was posted in Angelo Misthos, John Vonderlin. Bookmark the permalink.