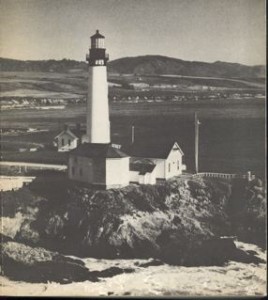 From the Coastside Comet, published in Montara, December 1922

The grammar school of the Pigeon Point district was burned to the ground at six o’clock on Tuesday morning, by a fire of unknown origin. Following a report received by his office, Superintendent of Schools Roy W. Cloud went to Pigeon Point yesterday and made an investigation.

It was found that abalone hunters passing the schoolhouse at 2 o’clock in the morning had seen a light, and upon looking in the windows had seen several people, apparently campers, asleep on the floor. The abalone hunters went on their way without disturbing the sleepers. At 6 o’clock residents of the vicinity saw the building suddenly break into flames, and before anything could be done the entire building and contents were destroyed.

The school, which would have closed for the Christmas vacation on December 10, was forced to close immediately on account of no other building being available. Arrangements are now being made for the securing of the Wiedemann dance hall, which was across the road from the school. When these arrangements are completed, the dance hall will be put in shape for use as a school room, and it is thought will be ready for occupancy following the Christmas vacation.

“The burning of this little school was very unfortunate,” said Superintendent Cloud in speaking of the fire yesterday. “The campers who were seen sleeping on the floor are and thought to have left some fire in this building when leaving. However, we have no means of knowing definitely who they were or which way they went when leaving the school…”

(Photo: Friends & Staff fooling around in front of the Coastside Comet’s office in Montara.) 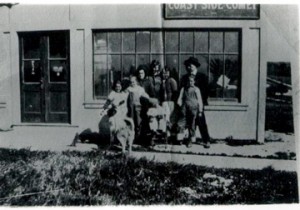