Acid Beach and Beyond

Hi June,
I’ve made two successful trips to Acid Beach in the last week. Both were dangerous and exciting, but extremely rewarding. I need some time to organize the stories, but I thought I should share a related item to a previous posting now. After the climb down into Acid Beach and the more perilous climb out, we visited the so-called Prankster rappel spot south of there that I’ve written about previously. Larry F., was able to find the Amb’s Beach sign he mentioned in his email.

It had fallen over and was hidden in the underbrush, but still bristling with mystery. I’d love to know who Monty Parker was, what killed somebody so young, who must have been extremely physically fit to rappel down the cliff to reach “his” beach, and why and who went to the effort to memorialize him in such a touching way?

It turns out the spot I thought was the rappel spot, what I considered a sure trip to the Emergency Ward, was not the actual rappel spot. The actual spot was about a 100 feet north and had three different pipes and a chain sunk into a subterranean concrete block that had been used as anchors to secure a rope at various times. While the cliff was not as fractured as where I thought the site had been and there was no stream to slicken the footing, if the Pranksters used this spot to access the beach below, somebody must have had some serious technical climbing skills. Much more on this soon. Enjoy. John

P.S. Check out this Y-shaped double arch, or is it a triple, on the south end of the tiny cove between Warm Water Lagoon and Acid Beach. 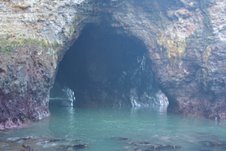 Hands down, this is the best arch on our coast. Next trip I’ll have pictures from inside it. On the north side of this fifty foot wide cove is this other sea arch/tunnel leading to Acid Beach. 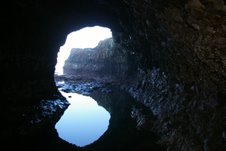 If you don’t mind getting your feet wet or if there is a minus tide of more then one foot, you can walk all the way through this. I can think of no fifty foot stretch of the California Coast that rivals this tiny, unnamed and almost unreachable cove.