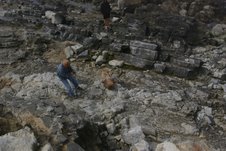 A few months ago I told you about sawing off a chunk of a huge telephone (?) pole at Pescadero Beach. I wanted to use it in my “Battering Ram” artplay piece.

With a huge bolt through it, kept in place with two giant nuts, the pole was too heavy at the time to get up the cliff and stairs to the parking lot. I managed to wrestle it up the rocks and leaned it against the ice plant dangling down to the foot of the cliff, thinking it was safe from the tide and waves, until I could figure out how to rescue it. 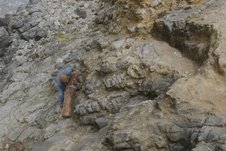 Then we had the series of giant waves that coincided with some extremely high tides, reaching places I haven’t seen inundated in the four years I’ve been haunting this coast. And my treasure disappeared.

About two months ago I spotted it, lodged in the rocks less then a hundred feet from where I had left it. Best of all, it was now on solid rock, instead of a minefield of ankle-busting, shifty, rounded boulders, as it had been. Above it there was a choppy, but relatively gradual slope to the top of the promontory, about twenty some feet higher.

Well, today, equipped with a couple of lariats, and a few cans of liquid courage, I went to round up my errant art supply. I’m happy to say it is now resting in my driveway, awaiting its incorporation into the family of escaped rogues the larger artplay piece represents.

For those not familiar with this piece, let me describe it and its meaning. Battering Rams are creosote-soaked telephone or power poles that somehow end up in the ocean. Virtually immortal because of their resistance to decay, they smash the already struggling flora and fauna on the reefs or oceanside rocks millions of times before they are reduced to splinters. Each time they are blasted into their vulnerable or immobile victims they deposit smudges of their toxic and carcinogenic oil tars, an oceanic version of rubbing salt into the wounds they cause to this ecosystem. 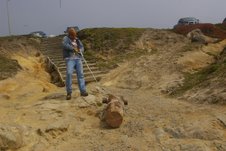 I round these miscreants up, wrapping them in tight coils of hundreds of feet of recovered crab pot rope in the cliche-ish manner of the landscaping arrangements found in front of many seafood restaurants. I haven’t decided yet if I should add a Marine Debris version of the obligatory pelican one expects to find perched on these symbolic arrangements. If I do something like that I want it to be on a ten- foot centerpiece pole, a backbreaking “piece de resistance.” 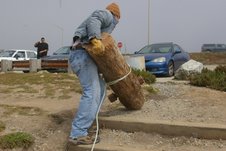 I’m not sure how many tourists photographed me in my Sysiphustic struggles, but a handful of the more curious approached me with questions. Needless to say, I found reason to stop and graciously answer their every question, hoping they had more.

Later when I was describing my efforts to get this Prodigal Pole, with its two giant nuts attached, up the hill, my brother couldn’t resist noting there were actually three nuts attached to it. I could only sigh and quote Shamu, the French Orca Philosopher, “The struggle itself…is enough to fill a man’s heart. One must imagine Sisyphus happy.”  Enjoy. John