I like to make up names to designate various places and features I encounter in my explorations. Usually it’s a form of shorthand I can use when discussing matters with my traveling companions.

When running through various possibilities of places to visit during a given trip, “the beach just south of the cove we accessed from that parking spot across from the landslide near Pescadero Creek,” is way too cumbersome, especially if three or four similarly obscure, nameless locations are also considered as possibilities.

Usually I try to come up with a name that incorporates some salient feature of the destination, i.e. Abalone Cove, Eyeball Beach, Forbidden Zone or Neptune’s Vomitorium. Keeping this in mind, I’ve decided to call the Acid Beach area “The Seven Sisters,” because of its seven wonderful sea arches.

If you Wikipedia this name you’ll find it has a venerable and diverse tradition. There are “Seven Sisters” in everything from mythology, women’s colleges, mountain ranges, mainline Protestant sects, Baja California surf spots, oil companies, caves on Mars and many many more.

In this case I feel the “Seven Sisters” is a Freudianly appropriate designation for a collection of the seven best arches on the California coast. All within two hundred yards of each other, the arches define and highlight this amazing sheer-cliff-faced stretch of practically unknown and unvisited coast.

Several of them, the double arch of Warm Water Lagoon (WWL) and the two that form a Y-shaped double arch in the cove between Acid Beach and W.W.L., are unique as far as I know. 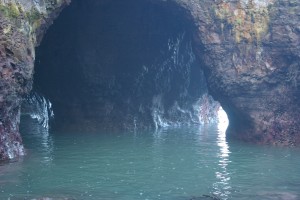 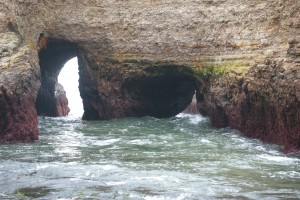 To fully appreciate this concentration of natural wonders, it’s best to see them up close. But, that’s not always possible, or safe. In a previous posting I shared a photo of the most northerly arch and described how you can reach it, by accessing it from Greyhound Beach, at extremely low tides, and climbing across an obstacle course of slimy rocks. 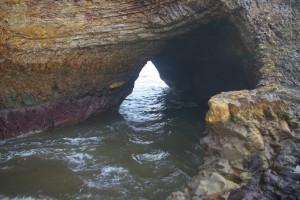 If the tide isn’t very low, or you don’t like long hikes, you can view it from the bluff top, just off Highway 1. 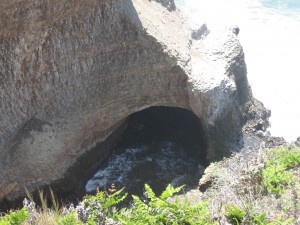 The promontory this photo was shot from is highly unusual itself. Screened completely from Highway 1 by pine trees, access to it is limited by bushes and a ridiculous growth of poison oak, but this has got to be the best coastal outlaw camping spot I’ve seen.

In fact, there were several sheltered “nests” under the sprawling pine trees, fifty yards from the highway that had been previously used. One even had seven five- gallon bottles of water stored there. Best of all, ocean-ward from the trees, the promontory turns into a kind of front lawn, a large flat area with grass and scattered flowers, instead of bushes. I can’t think why this is so, nor of any other spot on our coast quite like this. But, if I ever become homeless, you’ll know where to find me. This would be my waking view of Greyhound Rock with Ano Nuevo in the distance. 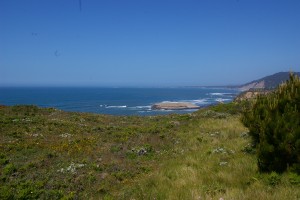