WWII on the Coastside

I posted a lengthy but interesting series of posts about WWII on the Coastside here:

“In the first part of 1942, ‘G-men came to our home in Moss Beach:” Elaine Martini Teixeira 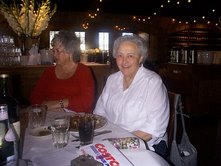 (Elaine Martini Teixeira at far right with her sister, Loretta.}

Sometime in the first part of 1942, before my brother left for service in the US Army in October, government men came to our home in Moss Beach.

My brother, Raymond Martini, recalls they showed some official papers, but said they were not given to the family to read, and we do not know if they were FBI or what was then called G-Men. My Dad was not a citizen; he was born in Brazil, though of Italian heritage. He came to America from Italy; the family returned to Italy after a few years in Brazil, where they had gone to find work. My dad and one brother were born in San Paolo, Brazil.

I do not know what these men said exactly, but the family was told that my Dad had spoken well of Mussolini. When my Dad came to America at 16, sometime in 1913, he probably did have a good opinion of him. it was much later that Mussolini became more of a controversial, political figure.

When my husband & I toured Italy in the mid-eighties, people said Mussolini had done well for the country when he first came to power; he did similar things as our president had done; he built up the roadways, trains, etc., had tunnels constructed through the mountains and opened up Italy to travel and transportation to France and Switzerland. Additionally, this gave work to the men who were unemployed.

My Dad never returned to Italy after he came to America. I can say, he never spoke to us about the Italian government, or said anything particularly favorable about it. He neither wrote or read in either Italian or English; he probably did not know a lot about the situation in Europe. My father was certainly not a political type of person. He was just a hardworking man raising his family.

I remember being in my bedroom and my Mom came and said we needed to get into the living room as these men had arrived. There were at least 2 or 3 of them, and they wanted us all in one room. They proceeded to search the house. We did not see a search warrant, or anything else, to indicate they had official status to be there there. Maybe, during the war, it was not necessary, and I am sure my parents did not ask about it. We were all rather afraid of what was going to occur.

Additionally, they might have been looking for a shortwave radio. Mainly, they found some rifles that belonged to by brother, as he was an avid hunter. One rifle might have been my Dad’s; he was a farmer, and they were allowed to shoot rabbits that ate the crops. My brother took responsibility for the rifles so they would not cause any additional problems for my father.

Mostly, my older sister, myself and my younger sister were sitting in the living room, and what transpired was related to me, later, by my Mother. She felt that someone who may have been upset with my father over something, probably had reported him to the authorities.

Finally, after quite some time, my brother, who was visibly upset, reminded the ‘G-Men’ that he had enlisted in the service and would be leaving for the army air force. He asked: Did they feel my dad would send messages to the enemy so they could sink a ship that would be taking his own son to Europe to fight?

The government men had no answer for my brother’s question. They left and we never heard from them again.
——————
To read more stories about Coastside WWII, click on http://www.halfmoonbaymemories.com/