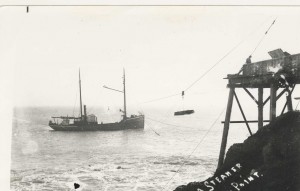 [Image of Pigeon Point illustrating the primitive shipping arrangement–prior to the arrival of Messrs. Templeton, Ames and Goodall.]

Loren Coburn wanted nothing more than for Templeton, Ames and Goodall to leave Pigeon Point Landing. Their ten year lease had expired and he wanted them gone. But these hardened men wouldn’t go easily. Their political instincts convinced them the County Board of Supervisors would step in and save the day.

There was the lease, a legal contract, that Coburn rightly counted on. Templeton,** Ames and Goodall apparently didn’t think much of contracts or the law. They had put money into modernizing the wharf; they, alone, had increased business. Pigeon Point Landing was now profitable; they were making money. In their minds, the wharf belonged to them.

If they weren’t going to honor the contract, Loren’s next move was to evict the tenants. Now things would turn ugly.

(Some Coburn observers believed this event triggered what would turn into a lifetime of litigation.}

The nearby village of Pescadero had not warmed up to Loren Coburn, their new resident. The villagers sympathized with the men who had fixed up the wharf. It wasn’t Coburn who had made the much needed improvements. And after all, the local economy benefited, with farmers loading their fresh produce at the well organized landing.

[Remember, before the modernization, there was a very primitive arrangement of loading and unloading goods, mail and vegetables.]

What was worse for Coburn–he didn’t pay the special school tax for a new school building–plus he complained about it to the county fathers. The villagers hated this newcomer who dressed in black swallow-tail coats, talked too fast and drove his horse and carriage recklessly. From the moment Loren Coburn set foot in town, there was an unstoppable torrent of gossip about how he got all the land he owned on the South Coast. None of it good. To everyone he was a ruthless landlord.

Right on cue, the Board of Supervisors condemned the wharf at Pigeon Point landing–and the battle began.

Two months later Loren got the State District Court in San Francisco to reverse the condemnation. The court ruled that the lands were not correctly identified, adding that the road leading there was a private road.

The only public property, according to the court, was the land accessible at high tide. This was interpreted as great news by Templeton, et. al. because much of the wharf extended out into the high tide. Now their problem became how to get to the wharf from the roads the court had defined as private.

That was soon solved. Templeton, Ames and Goodall built a gate “across the wharf, at the point where it extended 100-feet out into the high tide.” In a dramatic way, the gate disconnected the wharf from Loren’s property. At the very edge of the wharf there was an office, where John Kelly, the telegraph operator worked along with the wharfinger Alexander “Scotty” Rae. Scotty Rae’s main job was to guard the gate.

**In July 1871 the Pigeon Point Railroad Company was established with Horace Templeton, Josiah Ames and George Hearst, the mining millionaire.