June, there is yet another Ken Kesey/Año Nuevo Point connection. I will abbreviate Año Nuevo to AN.

I had the privilege of spending time on AN island in 1970 and 1971 with researchers from U.C. Santa Cruz studying the elephant seals. This project was headed up by one Bernie Le Boeuf. I would meet the scientists on the tip of AN POINT, and we’d climb into a Zodiac rubber raft with an outboard motor, and make the often perilous, wave-tossed crossing to the island.

At that time they were focusing on mating behavior and male rivalries. Certain “alpha” bulls controlled all of the females. The other bulls lurked around outside the harems, looking for any opportunity to sneak in and mate. We had blinds set up on all the breeding beaches, and would sit in those blinds for hours, recording which one bull backed down for which other bull, which bull successfully mated, etc. etc.

And how did we tell them apart? Each bull had a name spray-painted on its back. Some of the names were somewhat humorous. There was Nixon, for instance: Nixon the sea elephant.

The island was a wonderful place to explore, with its 19th-century lighthouse installation. The lighthouse itself had been vandalized by abalone divers, and all the fine curved diamond-shaped glass broken out. The iron frame of the tower had rusted to mere threads of iron in places, and most people wouldn’t dare climb it. I went up there quite a bit. Two windows, of the thirty or so, were partially intact. I obtained permission to salvage those windows, and incorporated the larger, pentagonal piece into a multi-paned window I made back in 1972. I still have that window, it is leaning up against the back wall of my hexagonal cabin. It was quite a trick fitting the curved glass into straight pieces of wood.

The two-story, rather simple, Victorian-era house of the lighthouse keeper was a place of great horror.

All the windows were broken out. The doors, gone. It was utterly infested with CA sea lions, upstairs, downstairs, everywhere. Hence the floors were literally a foot deep in sea lion excrement, with humps, here, there, everywhere: humps. These humps were dead sea lions.

So the house was not much of a pleasant place to visit.

But on the far side of the island were other buildings, all clear heart redwood, in great shape. And the water system of the island: a large underground cistern, made of concrete, with a concrete dish funneling rainwater into it, above ground. This dish was something like thirty feet across. It was carefully constructed to keep rats and such out, but the screens had rusted away, and down in the gloomy depths, floating in the water, were dead rats.

I made a wood stove from an old oil drum for the scientists. They would stay out there for days at a time, without any heat, without electricity, without running water. And those cold foggy winds never stop. Almost never. So I made a stove, and brought out some stove pipe, and set it all up for them. Between scraps of wood from the various buildings, and driftwood from the beaches, we were able to have a cheery fire out there, at night.

Those scientists had a rather casual attitude towards the sea elephants. When bored, they’d find a “weaner,” a baby sea elephant fully weaned, hence much like a golden, furry, bloated sausage, and at that age, there is little to do but sleep all day and sleep all night. The scientists would spy one out, sleeping on top of a sand dune, sneak up, and roll them down the dune with a single push.

The baby seal would wake up briefly, turning its large liquid eyes upon its tormentors, sneeze heartily, with mucus flying around, and then promptly return to sleep.

It was common, during fights between bulls, for baby seals, still with their mothers in the harems, to be crushed to death. We would then have to pick our way into the harem to retrieve the bodies, so they could be weighed and measured. This was highly dangerous.

The scientists taught me to “look tall” for the benefit of the bulls, to raise my arms above my head and not back down. It worked surprisingly well, but there were always times when one had to just turn tail and run for it.

It was wonderful to savor the aura of a true California island, offering as it did a unique view of the mainland.

The high bluffs of the Monterey Shale between AN and Waddell Creek are *not* from a roadcut, they are a scarp of the San Gregorio Fault, which has only in recent decades been traced all the way from Big Sur,
hence, it is much longer than originally thought, and capable of generating a powerful earthquake.

From AN looking to the mainland, these white bluffs are very conspicuous. They were landmarks for the earliest Spanish explorers of the CA coast, those bluffs, and by carefully reading the diary of a priest on one of those early expeditions along the coast, I was able to deduce the location of a certain Indian village just north of AN Point. I drove as close as I could, and then hiked inland to a certain hidden valley. It was rich with artifacts, both from the Indians, and from white settlers of the 19th century. In that hidden valley I found my first-ever Badger burrow, and my first-ever Redtail Hawk nest.

The bird life of AN Point is rich and varied to an extreme. Along Green Oaks Creek is a small reservoir. This is ringed with willows and tules and cattails. It is full of every kind of marsh bird. I used to canoe ever so slowly up that long narrow lake, binoculars in hand, paddling strong and quiet for an instant, and then drifting slowly into one of the many little bays. I saw so many marsh birds: Bitterns, Black-Crowned Night Herons, Long-billed Marsh Wrens, Soras, Virginia Rails, Great Blue Herons, etc. etc.

I knew where the Marsh Hawks nested, right on the ground, on AN Point. Ah, so many birds. A wonderful place for birds. To this day I am struck by the resemblance of the male Marsh Hawk to the White-tailed
Kite of either sex. The Marsh Hawks will sometimes mimic the classic kite behavior, fluttering over a single spot on the ground.

Well, that’s all for now. 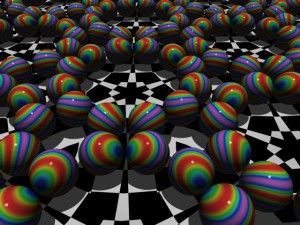