John Vonderlin (JV) The attached file is a Google Earth photo of Ano Nuevo Island showing the water cachment next to the Fog Whistle building. I assume the sloped larger light area surrounding the circular depression was part of the catchment. 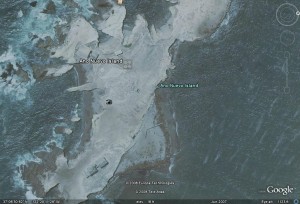 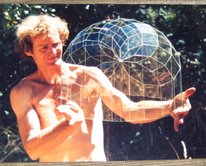 Russell Towle (RT)
Wow, great image. Yes that’s the catchment and the cistern is below
ground. They might have used a wind pump for all I know.

You can even see seals on the beaches. I had forgotten all about the
cement walls surrounding the area, like breakwaters as it were. One
could lean on the walls and look out to sea. They show up clearly in
the photo.

I wonder to what extent the Indians hunted the seals of all types. The
roughness of the coastal terrain militates against heavy human
populations, yet, one wonders. There could have been seasonal visits
to such areas, rich in seals, by tribes, clans, across the mountains
in the Santa Clara Valley. Here the Maidu would wander up into the
high Sierra in the summer, where they shared the high country with the
similarly-wandering Washoe from east of the crest.

Taking my best guess I can imagine small year-around villages along
that part of the coast, and seasonal visits by interior tribes which
might swell hunting camps as at Año Nuevo to a transient population of
a hundred or two hundred.

Here in this part of the Sierra there is cryptic evidence of an older,
pre-historic, pre-Maidu population, some 1500 to 4000 years ago, who
used atlatls, spear-throwers, and made elaborate petroglyphs.
Pre-bow-and-arrow Indians. Their spear points would be mistaken for
arrowheads by most people. An atlatl ought to work well on a seal,
even an elephant seal. Probably the main difficulty is that a
mortally-wounded seal would tend to escape into the ocean while dying.

Of course farther north the CA Indians went out to sea after whales in
huge dugout canoes. Unfortunately our records of the Costanoans are if
anything sparser than most.

You will know that during the last major ice advance, ending 12,000
years ago, sea level was much much lower than now. Hence much in the
wya of the oldest artifacts are out there beneath the waves and
beyond. I do recall that some abalone divers found a pair of matched
stone pestles in the reefs between the Point and the Island, back
around 1970. But here we may be talking more in the way of rapid
retreat of the coastline than rising sea level. The rise to present
levels was complete by 8,000 years ago at the least. One should think
of the unstable and rapidly-eroding coast as being still in a phase of
adjustment to the higher sea levels, that is, still in a
yet-more-rapidly-eroding phase.

All this of course complicated by the various motions along the faults
in the area, which are not just right-lateral or lateral
displacements, but always show some component of vertical displacement
as well. The many “fossil” marine terraces standing well above seal
level all along the coast are not relics of a previous higher sea
level, they are artifacts of tectonic uplift, wildly unequal and
lacking uniformity. All Año Nuevo Point is one such uplifted marine
terrace. The terraces are wave-cut, were formed below sea level. The
terrace at Davenport is likewise a marine terrace uplifted by tectonic
forces.

You could hardly find a more complicated geology, than is presented by
the Santa Cruz Mountains.

There are Indian caves in a cliff-walled canyon down towards Santa
Cruz, south of Davenport; I used to explore them; they had been dug at
least cursorily by UC Santa Cruz archeologists, I believe. They are
interesting because they demonstrate just how marginal a cave (so far
as size, ease of access, and other factors of convenience and comfort)
can be, and still have been put to use.