Interesting to see the old photo. A good indication of how remote that part of the coast was, way back when. I never heard that rock called “Alligator Rock,” nor “Cape Horn.” “Cape Horn” would seem to have been a favorite name for a rocky prominence around which some tortuous path must be followed; we have a Cape Horn here in Placer County, which was turned by the Central Pacific Railroad in 1865, at great cost. Prior to then it was simply avoided by travelers, teamsters, whatever. But the railroad had to maintain an easy grade. And that easy grade led right across the cliffs of Cape Horn. The flat-lying strata exposed in Alligator Rock look suspiciously like the Monterey Shale Formation (MSfm) which also composes the Waddell Bluffs. The trace of the San Gregorio Fault is quite near, but here, at least, it may not bring two disparate formations into faulted contact; but I do not have my good old geological map of the area at hand. The old photo reveals that Alligator Rock is the base of a prominent spur projecting from the Bluffs. It is always somewhat humbling to me to find that geological formations are not uniform. I like exact solutions, such as, the diagonal of a unit square is the square root of two. Hence I want geological formations to be uniform and homogeneous. Here we see that for some reason, very locally, the Monterey Shale Formation was more resistant to erosion, than were other seemingly identical parts nearby. I wonder why. I remember Hank Bradley telling me once that the light-colored shales of the MS fm. were thought by some to be related to the extensive rhyolite ash deposits here in the Sierra, also Miocene, or earlier Oligocene, in age. The model proposed was that as these widespread, voluminous, light-colored, siliceous ash deposits were eroded from the Sierra into the Pacific, they accumulated at depth to become the MS fm. This is fairly plausible; it has its problems; but I wonder if the idea has gained or lost currency since 1970. Howsoever, the MS fm. is a light-colored shale of a siliceous nature. Do I recall that it is diatomaceous? If so, then the shale may be largely composed of siliceous skeletons of diatoms, and the Sierra’s rhyolie ash was proposed as the thing which made so much silica available to those diatoms. Here in the Sierra we have huge areas of metasedimentary rocks, often slates, broadly speaking, which also vary within formations. For instance, five hundred feet thickness of slate can give way to fifty feet of chert, and then another five hundred feet of slate. In such a case the chert will resist erosion more than the slates, and (since all the strata are tipped up to nearly vertical), if exposed on a canyon wall, this bed of chert may become a spur ridge, the slate areas flanking it, broad ravines. So with the Bluffs and the Alligator Spur perhaps we should wonder whether chert could be involved. In the Pliocene siltstone cliffs north of Alligator Rock and verging into the south side of ANP, there are lenses of shell fragments, and also very interesting local variations in the siltstone, which seem to have to do not so much with hardness, but with cohesiveness. For a harder rock may be fairly friable and easily dissected by erosion, but a softer rock with greater cohesion may more stoutly resist erosion. From those brown siltstone cliffs erode very curiously curved nodules of siltstone, which are like so many Beniamino Bufano sculptures. I still have one of these pretty nodules; a photo is attached. 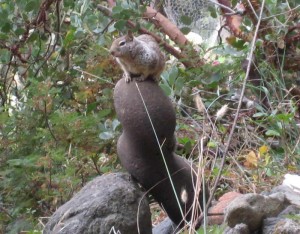 Hank told me the chert of the Indian Mounds at Año Nuevo was from the Monterey Shale, but in years of hiking up in the Chalks I never once found an exposure of chert. That chert is so distinctive, it may well have come from a single quarry. I wonder if that quarry is known. I have found Indian chert quarries here in the Sierra. My recollection is that the beach at the base of Waddell Bluffs runs right up to the south side of Año Nuevo Point. We used to drop right down to that beach from the low cliffs at the north end, right by where the side road for ANP ended in a little parking area. Back in the 1960s and early 1970s. Hank had his own little jeep trail from Highway 1 down to that beach. I couldn’t swear to it, but my guess would be that Coastways Ranch land extended down to the county line. Hank used to say they had a “mile” of beach. He assumed it would be purchased by the State Park. I guess it still hasn’t been so purchased. He patrolled that beach pretty much every day in his jeep, handing out his permission slips to anyone he found, thus safeguarding the beach’s value when it came time for the State to buy it. His reasoning was that the State would not be able to say,”That one mile of beach is not worth so much, because it is already in free use by the public.” Hank Bradley was a tall angular man, quite friendly and gracious, he and his wife Betty often made me welcome at their house, and I loved to listen to his stories. He gave me the free run of Coastways, which property, as you will know, contains the very northernmost natural grove of Monterey Pines in existence. If you follow the ridge containing that grove up into the Chalks, you will soon encounter a closely-related species, another member of the “closed-cone pine” sub-genus of the genus Pinus, the fire-adapted Knobcone Pine. The two species hybridize right there above Coastways Ranch, where the one meets the other. Higher up that same ridge, I used to gather native blueberries and huckleberries. I was up on pretty much all those main ridges behind Año Nuevo Point. It was often pretty rough going, but sometimes not. Once fully up in the Chalks and above the humid coastal belt, one got clear of most of the Ceanothus, and entered an elfin forest of chaparral, manzanita, hucklberries, and remarkable stunted Douglas Fir and Coast Redwood, sometimes only a few feet tall. In that elfin forest there were many areas of bare shale. This made travel possible. Yes, the old photo is interesting. People found a way. One can be pretty sure that the teamsters never dared to let a loaded wagon onto the sand beach itself; from the photo, one sees that the track was cut into the base of the Bluffs. That is workable for a loaded wagon. Teamsters faced many such challenges here in the mountains, in the Sierra, where an endless number of mining camps needed supplies, many inaccessible by road. So one might have to skid some tons of equipment, a stamp mill, say, for crushing ore, right down the canyon wall to the mine. This might require the services of some mules. But it was a terrible nuisance, so a good teamster, who could get that stamp mill as near as possible, by hook or by crook, before the dreary bone-crushing business of skidding masses of iron began, well, a teamster like that was pure gold. Perhaps a tree must be cut, here; to allow the wagon to pass; perhaps a boulder must be pried out of the ground, there; and over here, a bunch of bulders must be piled up purely ad hoc, just to allow the wagon wheels to crawl up and over a larger, immovable boulder. The teamsters were experts at all this. And those wagons, whatever else were there problems, had great ground clearance on those large wheels. In the winter, if need be, giant sled-runners were bolted on, and the loaded wagon would be drawn over snow twenty feet deep. Steam sawmills were moved over 7,000-foot passes in the dead of winter in this way. One of the first parts of such a job was breaking a trail in the softsnow for the teams pulling the loads. It was anything but trivial. But the worst enemy of all was soft ground. To see your noble four-foot-diameter wagon wheel axle deep in red clay, your mighty oxen standing patiently, straining against the yoke when asked, but to no effect, to no effect. Hours of digging were required. Perhaps the wagon would need off-loaded for there to be any chance. You could pull your wagon, with its standard eight-thousand-pound load, out of one mudhole, only to see it sink in another, ten feet away. Knowing this I suspect the teamsters avoided the sand, at least, when loaded. An empty wagon would be a different story. I once got a ride all over the area in a small plane which landed on my beach at low tide, picked me up, and landed me there again half an hour later. And I know Hank Bradley’s jeep preferred the wet sand exposed at low tide to the dry sand higher on the beach. R