‘The Notch’ Gets to Know John Vonderlin & Friends

A couple of days ago I agreed to meet Larry and Meg at the rappel site on the blufftop above Acid Beach Cove, hoping to continue our exploration of this incredible area.  Having already photographed from sea level all of “The Seven Sisters,” as I’ve dubbed the cluster of Sea Arches here, we had another goal in mind this time, reaching “The Notch.” This small cove, entirely cut off from land access by sheer 150 foot cliffs and arch-punctuated  promontories on either end, is the last stretch of untrodden beach, by us, at least, in this section. Having previously discovered that even at the lowest of tides, and with a willingness to wade (hiking in was impossible), we needed a better plan. We thought we had one this time, that being, after climbing down, wetsuiting up, and donning lifevests, we would  boogieboard around the Acid Beach Arch north to the cove.
While waiting for my friends to arrive, I had done some bushwhacking, finally locating a way to get through the poison oak to a point above “The Notch,” from where I could take some pictures. I wouldn’t call it a trail, but if you carefully head down hill from the 34.28 road marker, you should get these views. 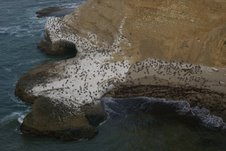 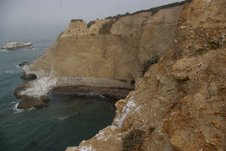 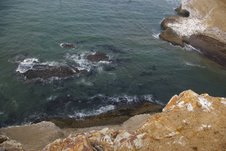 They say mistakes are better teachers then successes, so I’ll reflect on mine for a while. But, rest assured, when we return to get to know this area better, and take video of our passages through all seven arches, I won’t be wearing my kayaking life vest, won’t be using a boogieboard, but I will be wearing my fins and mask. But, most importantly, I’ll face up to the fact the “water baby” is long gone, leaving an out-of-shape water geezer, who needs to be more careful lest he become crab bait.   Enjoy. John.

This entry was posted in Russell Towle, Uncategorized. Bookmark the permalink.