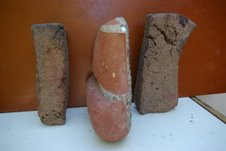 Story/Photo by John Vonderlin
Email John ([email protected])
Hi June,
I haven’t heard back from the brick collector’s website, but I’ve discovered a strange coincidence while researching the possible origin of the brick I photographed in the gravel of Gazos Creek. The first part of the coincidence occurred when I was reading the link I included in the story about Hulda Hoover McLlean and the Rancho Del Oso.
The link’s story recounted how two orphans from Oregon, when they first viewed the Waddell Valley, dreamed of owning a piece of this special place. The older young man, Theodore Hoover, Hulda’s father, eventually became the first Dean of Engineering at Stanford and bought 3,000 acres of the Waddell Valley. His younger brother, Herbert, became the 31st President of the United States.
The second part of the coincidence came to light when while reading Harvey Mowry’s book, “Echoes of the Gazos Creek Country,” hoping to find a possible source for the brick I had photographed, I came across this quote from a letter by Carol Edwards, the oldest daughter of Charles Littlefield. “My brother Reid, I, and our cousin, Bill Grover, dismantled all the firebricks in and around the boiler at the McKinley Mill and hauled them down to Dad’s for the boiler at his mill.”
Then on Page 67, in an aside to a quote by Charles E. Steele, (born in 1891 on the Gazos Ranch) Harvey says, ” The McKinley Mill, whom Charles Jr. refers to, was actually the Templeton-Moore Mill or Pacific Lumber and Mill Company sawmill, built around 1871. Local residents usually called it the McKinley Mill after James McKinley, an older brother of William McKinley. James reopened the old mill in 1882, calling it simply the Gazos Mill.”
William McKinley was our 31st President, first elected in 1896, then re-elected in 1900, only to be assassinated by an anarchist, Leon Czolgosz, and succeeded coincidentally by another Theodore, the first Roosevelt President.
If I’ve got this right, two small, isolated, very sparsely populated coastal valleys, the Waddell Creek and the Gazos Creek watersheds, which touch each other in their higher reaches, have intimate connections to two older brothers of historic families that produced two of America’s Presidential families. Figure the odds on that. Or let me know if I’m wrong.
To add a bit more brick weirdness to go along with Hubert “Limey” Kay and this strange coincidence, I’ve attached a photo of another of my Synthetikites (the eroded, rounded chunk of bricks and mortar) and several very strange bricks I found on an abandoned homestead on a piece of land my friend was renting in the hills above Anderson, southeast of Redding. I have no explanation for their condition, but thought these wonderful “Ugly Ducklings” should be preserved. Enjoy. John
This entry was posted in Uncategorized. Bookmark the permalink.