Not quite, but I did find a connection between Honest Abe and Pescadero recently. I was reading Dr. Alan Brown’s  book, “Place Names of San Mateo County,” when I found this entry under the heading of Lincoln Hill:

“Due South of the center of Pescadero.  A year ago or two ago, a gentleman from San Francisco proposed to have a flagstaff on this noble looking mount on condition that it should be named “Lincoln Mount,” all of which was done. The last winter’s storms and winds, however, carried away the staff, but the spot is still cherished and will always bear the memorable name of Abraham Lincoln, of course. (S.F. Alta 3/27/1867)” Dr. Brown then commented,  “The adoption of the more natural present name was doubtless made almost immediately.” Oh, those fickle Pescaderans.

I must confess I’d never heard this name, but I drove through Pescadero yesterday on one of my forays to the coast and took these pictures 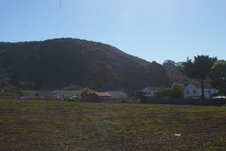 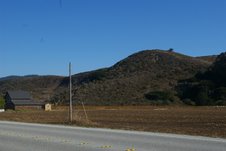 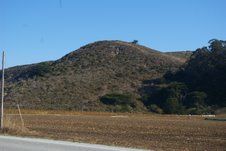 of the “noble mount” that presides over Pescadero. I searched around its base in the downtown area and found no obvious trails to its top, but I’ll investigate a little more in the future. Unless my memory is faultier then I think, there are a number of historical photos of downtown Pescadero that were obviously shot from the commanding view the top of this hill must provide.
What was more interesting to me was the source of this little historical tidbit, the “S.F. Alta.” A quick check of Wikipedia brought up this: “In the second half of the nineteenth century, there was a San Francisco-based newspaper called The Daily Alta California (or The Alta Californian). Mark Twain‘s first widely successful book, The Innocents Abroad, was an edited collection of letters written for this publication.”
Using “The Daily Alta California” as a search term I brought up the following Wikipedia entry.
“The Daily Alta California was a San Francisco newspaper descended from the first newspaper published in the city, Samuel Brannan‘s California Star which debuted on January 9, 1847. Brannan, who had earlier assisted in publishing several Mormon newspapers in New York, had brought a small press with him when he immigrated to California as part of a group of Mormon settlers in 1846.
With Dr. E.B. Jones as editor, the California Star was the city’s only newspaper until an older publication, the Monterey Californian, moved to Yerba Buena, as San Francisco was then called, from Monterey in mid-1847, becoming simply The Californian. The city was about to undergo rapid changes as the California gold rush got underway. The California Star appeared weekly until June 14, 1848, when it was forced to shut down because its entire staff had departed for the gold fields. Its rival newspaper had suspended publication for the same reason on May 29.Later that year, Sam Brannan sold his interest in the moribund California Star to Edward Cleveland Kemble, who also acquired The Californian. Kemble resumed publication of the combined papers under the name Star and Californian on November 18, 1848. By 1849, the paper had come under the control of Robert Semple, who changed its name to the Alta California. On January 22, the paper began daily publication, becoming the first daily newspaper in California. On July 4, 1849, Semple began printing the Daily Alta California on a new steam press, the first such press in the west. Other names commonly referring to the paper include the Daily Alta Californian, the Alta California, and the Alta Californian.”
With Abe Lincoln and Mark Twain being a couple of my childhood heroes I’m looking forward to checking out the ongoing nationwide 20 year long online project part of which is detailed below. Perhaps I can find the full article about that “gentleman from San Francisco” and find out why he paid to memorialize Abe in Pescadero. Enjoy. John
Under the NDNP and LSTA grants, the Center has digitized over 150,000 pages of California newspapers spanning the years 1849-1911. They include the Alta California (1849-1889); the San Francisco Call (1900-1910); the Amador Ledger (1900-1911); the Imperial Valley Press (1901-1911); and the Los Angeles Herald (1905-1907).
This entry was posted in Uncategorized. Bookmark the permalink.