Hi June,
Sometimes as winter approaches I feel an amost perverse excitement about the impending onset of foul weather. Landslides, flooding, dangerous wet roads, and long, wet, cold, and windy stretches of dreary weather are dismissed by me as insignificant. For the soaking storms, with their strong winds and the large waves they generate, not only bring ashore large amounts of both flotsam and non-buoyant marine debris for me to gather, they also initiate the best part of the local mushroom season. Sometimes overnight, but always within a few days of the first good soaking rain, the “early bird” species begin to poke through the forest duff.

Here in coastal San Mateo we are blessed with a wide range of ecosystems, many with their own complement of unusual fungi, of which many are edible. I’m relatively new at mushroom gathering and not an expert mycologist so I tend to confine myself to eating only the more common varieties of easily recognized fungi. I’d like to share some photos of my favorites with excerpts from Wikipedia about them. 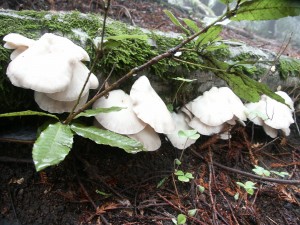 “The Oyster mushroom, or Pleurotus ostreatus, is a common mushroom prized for its edibility. Long cultivated in Asia, it is now cultivated around the world for food. It is related to the similarly cultivated “king oyster mushroom”. Oyster mushrooms can also be used industrially for mycoremediation purposes.
Oyster mushrooms are a natural source of statin drugs. Studies have shown that they typically contain 0.4% to 2.7% statins on a dry weight basis. Z. Naturforsch Study. A number of studies on lab animals have shown that adding Pleurotus to the diet can reduce cholesterol under some conditions.
The oyster mushroom is also one of the few known carnivorous mushrooms. Its mycelia can kill and digest nematodes. This is believed to be a way to obtain nitrogen.
Oyster mushrooms contain a small amount of arabitol which can cause gastrointestinal distress in some people. Arabitol is a sugar alcohol similar to xylitol, manitol and sorbitol; these sugar alcohols are widely used food additives and can also have laxative effectives in susceptible individuals.” 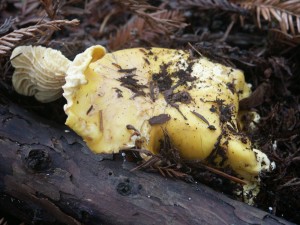 My favorite of the local edible mushrooms is the Golden Chanterelle. Because they come up year after year in the same location, we tend to guard against “loose lips” when talking to fellow “mush-heads” about our sites, fearing they might try to “steal” “our” mushrooms. Tramping through the woods to your sites, with golden dreams of savory mushrooms tickling your imagination’s palate, only to find the sad crumbled remnants left by someone who beat you to the prize is one of life’s greatest gustatory disappointments. Once that happens only the sad refrain of fans of lousy sports teams, “Wait until next year” gives you any solace.

“Chantarelle or Golden chanterelle (Cantharellus cibarius) is probably the best known species of the genus Cantharellus. It is orange or yellow, meaty and funnel-shaped. On the lower surface, underneath the smooth cap, it has gill-like ridges that run almost all the way down its stipe, which tapers down seamlessly from the cap. It has a fruity smell reminiscent of apricots and a mildly peppery taste, and is considered an excellent food mushroom. Scientific research has suggested that the golden chanterelle may have potent insecticidal properties that are harmless against humans and yet protects the mushroom body against insects and other potentially harmful organisms[1]”
.
Puffballs 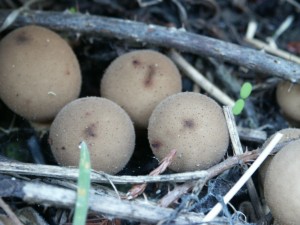 “While most puffballs are not poisonous, some often look similar to young agarics, especially the deadly Amanitas, such as the Death Cap mushroom. It is for this reason that all puffballs gathered in mushroom hunting should be cut in half lengthwise. Young puffballs in the edible stage have undifferentiated white flesh within; the gills of immature Amanita mushrooms can be seen if they are closely examined.
The giant puffball, Calvatia gigantea (earlier classified as Lycoperdon giganteum), reaches a foot (30 cm) or more in diameter, and is difficult to mistake for any other fungus. It has been estimated that a large specimen of this fungus when mature will produce around 7 × 10¹² spores. If collected before spores have formed, while the flesh is still white, it may be cooked as slices fried in butter, with a strong earthy, mushroom flavor. It can often be used in recipes that would ordinarily call for eggplant.” 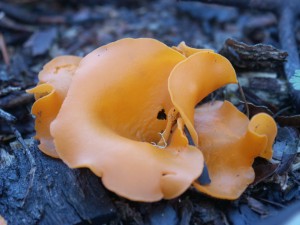 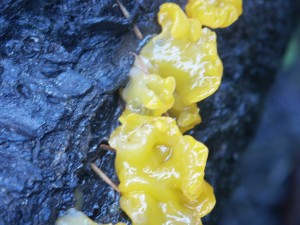 “Tremella mesenterica (common names include yellow brain fungus, golden jelly fungus and Witch’s butter) is a jelly fungus that is commonly found on rotting wood, especially gorse, as a parasite of crust fungi of the genus Peniophora[1]. It is not considered edible, though it can be cooked in soups, or used as a substitute for Jelly Ear fungus.”

While using this in cooking, tastewise, might be the equivalent of adding celery to a rich vegetable soup, it’s pretty cool when you can drop the name “yellow brain fungus” when you’re offering to serve your guests. It almost always guarantees more for yourself. Enjoy. John