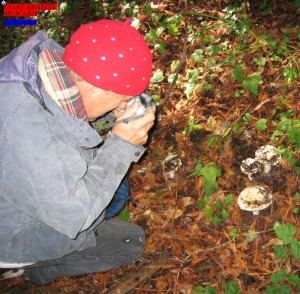 I believe the Worley of Worley Flats  fame (almost) was William L. Worley. In “San Mateo’s 1870 Federal Census, Page 410B, Sixth Township, Post Office Pescadero” there is only one listing for a Worley. He was 47 at the time. He listed his occupation as a farmer and his birthplace as Tennessee. That fits with Dr. Brown’s book’s decription of Worley Flats’ name’s origin timewise.

Since I learned about Pescadero’s, “Biggest Hole That Never Was,”  a few weeks ago, my mind has been traveling down some odd, speculative paths.  My discovery of the almostness of this proposed behemoth’s existence,  followed by a visit to the site where it might have been, and some subsequent contemplation of the possible present state of my favorite playground, The Coastside, had this dream come to fruition, has me thinking about forks in the road not taken.
It was while reading about “The Stage Hole,” in Dr. Alan Brown’s 1960 book, “Place Names of San Mateo County,” that it started. Dr. Brown mentioned in his brief notation about ,”The Stage Hole,” that  the old stage road had run across what he knew in the present time (1960) as Nunziati’s dam. That was before the old road was abandoned in 1859 to be replaced by the appropriately and still-to-this day-named Stage Road.
While websearching, using “Nunziati and Pescadero” as a search phrase, I found a posting on a forum that included  three old local newspaper articles from 1970, about  the Army Corps of Engineers, holding public meetings on seven different proposed dam construction sites in the coastside watersheds near Pescadero.
Their favorite possible site was the so called Worley Flat option. They were proposing to build a 233- foot- high earthen dam, on Pescadero Creek, at Worley Flats, about 1 mile east of Memorial Park, roughly eight miles inland.
When a series of public hearings were held to discuss the options, a Mr. Nunziati, spoke strongly of the benefits that would proceed from a Worley Flats Dam. Those might have included a better-then-Hetch Hetchy quality, reliable, water source for everybody in the watershed below the dam and far beyond, up and down the Coastside, a lake-based, tourist magnet, with a wide spectrum of possible associated recreational opportunities, and the nearby jobs they would create, and of course the peace-of-mind-security, upper watershed flood control dams gift the population they overlook, in those tense “The Storm Door is Open,” periods, that can last weeks, in the mountains along our coast, during wet winters. From his position on the Water Committee, his voice was well heard in the public hearings about the proposed dams.
If this is the same Mr. Nunziati, who used the small storage ponds, of which, “The Stage Hole,” is one, to grow crops around Round Hill, it is easy to see why he believed strongly that a dam was the answer to his and many other local farmers’ water problems, and that it would have been a boon to  this area.
Since we all know there is not a “Richard Milhous Nixon Dam” on Pescadero Creek, I won’t bother  relating the few details I know of the public’s reaction, almost forty years ago, to what they considered a  seven-headed Hydra, come to kill their way of life.
However, I woud like to relate the details of a trip we recently took to the site of the proposed Worley Flats Dam. (I made up the part about Nixon, but he was a popular President at the time the project would have been named, and we would have been stuck with the name thereafter.)
Here are a couple of screengrabs of a U.S.G.S. map of the Worley Flats area. 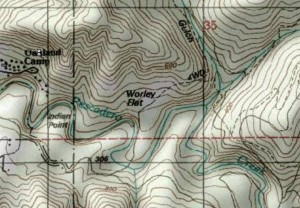 On the second one, I’ve used a “black bar” to approximately where the dam would have been. The reservoir would have been bifurcated, with one arm going up Jones Gulch and the other going up the canyon that Pescadero Creek flows through. I’ve also attached a photo of the Park’s kiosk map. 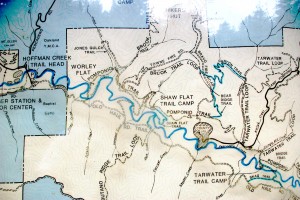 I should mention that my friend Meg’s house sits on a cliff sixty feet above Pescadero Creek, about a mile downstream from the proposed dam site. We’ve speculated about the type of dam failure that would sweep her home away. I bet on a spectacularly rainy stretch in late-winter, the creek running high, roaring over the dam’s spillway when, an 8.7  earthquake along the San Gregorio fault, triggers a general collapse of the dam’s face, unleashing 50 billion gallons of water in a matter of minutes.
Reading a bit about the thousands, yes I said thousands of failures of earthen dams in the United States throughout history, particulary the details of the Johnstown Flood, our worst dam disaster, I came to realize it wouldn’t need a rare set of circumstances.
This excerpt from Wikipedia about the Johnstown Flood explains why
“On its way downstream towards Johnstown, the crest picked up debris, such as trees, houses, and animals. At the Conemaugh Viaduct, a 78-foot (24 m) high railroad bridge, the flood temporarily was stopped when debris jammed against the stone bridge’s arch. But after around seven minutes, the viaduct collapsed, allowing the flood to resume its course. Because of this, the force of the surge would gain strength periodically, resulting in a stronger force hitting Johnstown than otherwise would be expected.”
I suspect all the giant redwoods still left in the Pescadero watershed might cause the same effect; forming a series of logjams, with  temporary lakes a hundred feet deep, flooding the canyon behind them, only to have them break, unleashing a wall of water laden with its crushing debris.
For the tens of thousands of people seven miles downstream, who might have lived in the “Nixonville Flats,”– the suburb that might have grown up around “Old Pescadero”– in the nearby, drained and filled marsh areas, there would be scant warning. Only the occupants of the upper floors of the large condo towers in town would be unscathed.
Still, while the fate of submersion seemed a remote possibility for Meg’s house, with a failure of the Worley Flat Dam, it was actually part of the plan in another of the proposed dam sites. The Five Mile site, so called because that’s how far inland from the coast it was to be built, would have left Memorial Park and Meg’s house somewhere at the bottom of the lake. But, that will be addressed in a future story about “The Holes of Pescadero.”
The Worley Flats Dam Project was probably the Worleys’ big chance for immortality. While they’re already way ahead of me, what with a flat named after the family, this ws their chance to make the “Big Time.”The thought of generations of knowledge-thirsty school-age children, by the endless busload, visiting the dam and asking: “Who were the Worleys?”…and having their teachers respond with well-prepared answers about the Worleys, lives would have cemented their place in history. That is, unless, the schoolchildren were there to visit the memorial at the sundered remains of the dam, whose failure had wiped out all the good citizens of Nixonville/OldPescadero, thereby learning a valuable lesson about misjudging the power of Mother Nature. Or “Pulling a Worley” as such errors might have subsequently become known locally.
Under the heading of “The Worley Field” he states: “A clearing on the N bank of Pescadero Creek about 3/4 above Memorial Park; Worley is said to be the first settler here in the 1860’s or 70s.”
Next a visit to where it ain’t, but might have been. if a different fork in the road had been taken. Enjoy. John

This entry was posted in Holes in Pescadero, John Vonderlin. Bookmark the permalink.