In Part 1, I was in such a hurrry to push my account to the point of reaching the location of Gordon’s Chute, that I left out a couple of “points of interest” that you will see along the way. As I previously wrote , after you’ve wound your way to where the beach comes into view, after having passed the ominous “Skull Graffitti,” scurried over the “Slime Pit” on the wobbly log,  inched along the slippery, precipitous “Inca Trail,” and finally struggled through the dense underbrush of the riparian corrider, into the open, you’ll see something I forgot to mention: A series of huge, parallel concrete blocks. They are the last remnants of the Tunitas Gulch Trestle, the figurative, and perhaps someday, the metaphorical “end-of-the-line” of the famous, but ill-fated, Ocean Shore Railroad. The blocks used to be heavily covered by bright blue and fluorescent,Tagger-type painted graffitti, but somebody, mercifully, covered those with a camouflage-style coating that seems to be getting less obtrusive as time passes. Might be me, though. 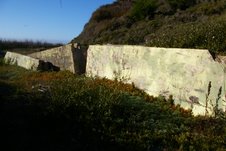 If you want to head towards the southern end of the beach, close to the trestle remnants, there’s a log that spans the creek, and with a little  balancing act, you can do it, no problem. If you can’t do that, perhaps the green coating of shoe- slime you picked up earlier on the “Log Walk,” will look tasty with an ample topping of white sea foam (a thick layer of the fluffy stuff huddles on the waters surrounding the good-sized tree you’ll be traversing) 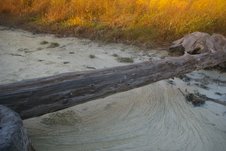 But this time we’re going to head north. After reaching the sand where the creek, which had been hugging the base of the hill, veers westward toward the ocean, Meg and I discovered this wonderful bit of Ephemeral Beach Art. 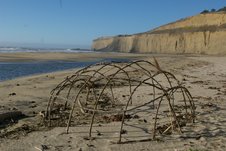 Knowing that this area was a camping site for Portola during the famous 1769 Expedition, probably because of the Ohlone village that was once here, I couldn’t help but wonder if there is an Ohlone, or other  Native-American connection to this structure. It has wonderful lines,  seems to be easy to build, and when  thatched, would provide sufficient shelter under all kinds of skies. It’s fun to visualize how it might have been 500 years ago, on an overnight shellfish-gathering expedition from a nearby village to this special site, under the magical cliffs of Tunitas.

Now, 240 years after the Portola Expedition, I found myself walking and standing and thinking where the explorers may have done the same. I am not surprised by this feeling of “continuity,” if you will.  I am sure they enjoyed the same incredible views of the Pacific, the spacious sands, looming cliffs, and the ever-changing rhythm of the surf that is found here.

As we headed further north across the sand, a distance away from the sheer cliffs for safety’s sake, we encountered a tire, one of Tunitas Beach’s most common non-buoyant Marine Debris “aggravations.” I’ve observed tires being coughed up more frequently by “Neptune’s Vomitorium” at the north end of the beach, more than anywhere else on the Coastside. Then they slowly migrate south down the beach. Sometimes it takes months for a nubile tire to make the voyage; then it will vanish into the offshore Longshore Current (once again.) 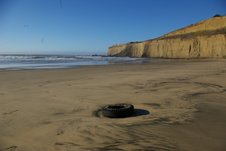 The particular stretch of sand this tire was marring, was, and is, the province of Jim Denevan’s, aka, The Sand Man. I might have stepped onto his favorite practice area where he creates his world famous sand etchings. Alas, he seems to have stopped coming. Perhaps, this winter, when most sane folks are barred from access by the difficult terrain, I’ll spot his bare footprints leading away from his latest wonderful piece of art.
One hundred yards further, and we are standing at the gateway to Alexander Gordon’s Chute site. Only passable in a good minus tide, this “gauntlet-style” passage is coated with a healthy layer of many types of slimy algae, turning walking into a “pay-attention business.” 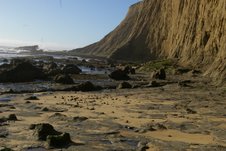 But we thought by hugging the cliff base, in the narrow band above the slime, and doing a timed-dash across the one, always wave-washed area, then clambering up a slick wall onto the terrace of the base rock for Gordon’s Chute, that we would be ready to launch our expedition into new, unexplored territory, the Tunitas sea cliffs, stretching north to Martin’s Beach. What I now call “The Forbidding Zone.” Home to many large sea caves, where some have tall-taled, suggested or perhaps revealed, sea monsters or other strange creatures might live. Certainly, it is one of the least explored, least written about and apparently never photographed stretches of our coast. I wanted to change that.

Up to this point, I had been feeling pretty confident about our plan and the planned route.  But, if you look carefully in the far distance of the gateway picture, above the base rock of Gordon’s Chute, you can see a huge spray of  whitewater. This is right at the low spot I was hoping to lower myself from the top of the base rock to the sand below next cove, and then use my little ladder to climb back up after probing north. Seeing this made me worried, and that was from a distance.  Next Part 3 The Base Rock, Chicken’s Roost Redux? Enjoy. John
Below is a page from the California Historical Landmark about the #375 Marker at Tunitas Creek;Tunitas Beach, Indian Village Site on Portola Route

The Portola Expedition of 1769 discovered this Indian Village on Tunitas Creek in the southwest corner of Rancho Canada de Verde y Arroyo de las Purisima; the Rancho was granted to Jose Maria Alviso in 1838