Minus Tide: What Happened to My Best Arch (MBA)? Story by John Vonderlin

Posted on December 12, 2008 by June Morrall
More photos coming soon
The Fallen Arch
Story/Photos by John Vonderlin
Email John ([email protected])
Hi June,
Today’s trip to the Coastside was perfect, in concert with its delightful low 60s temperatures, its sunny blue sky, its almost windless and tourist-less vistas, and the revitalization one feels when viewing the coastal hills greening up from the earlier rains. Even my camera sensed it, as it took some of the clearest shots I’ve ever taken of Pigeon Point Lighthouse. 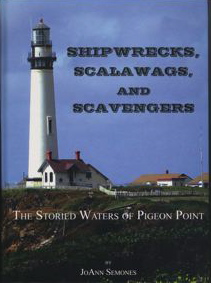 But, that might be my enthusiasm talking about the locations the shots were taken from.

Alas, amid this paradisical ecstasy, “Agony” awaited. For while fresh air and beautiful scenery were the foundation of our trip, we had goals.

Our No. 1 goal was to capture images of us standing on top of  the sea arch I had written about in the Lou Denny Wayne (LDW) story. Between Pigeon Point and Gazos Creek, the stretch of coast where the sea arch is located, includes a series of small coves, isolated from one another, and from beachcombers, by rocky promontories extending into deeper water. But when we get the excellent minus tides that we are having this week, very conveniently at their lowest in the mid -to- late afternoon, access is possible.

When we first discovered this sea arch last year, we didn’t take time to document it well, as we were intent on pressing south, hoping to find the site where the Lou Denny Wayne had gone aground. I shot a few photos, and then we continued southward. After we had found the LDW wreck site and some wreckage, shot a few photos, and talked with the Marine Sanctuary scientist assessing the wrecksite,  we moved on towards Gazos, instead of backtracking, fearing the now rising tide on the long return along the path we had followed.

While we made the right choice that day, we wanted a lot more photos of a moderately picturesque sea arch. One that very people have ever seen. Picture # 200506615 on the California Coastal Records Project site (CCRP) shows the arch. And the black bar 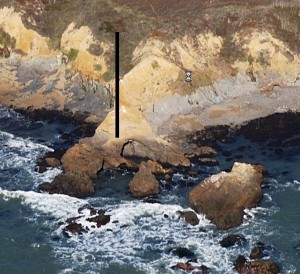 on this screengrab from that picture shows where the arch is.

Alas, more accurately, the bar indicates where the arch was.

Because when we arrived at  the promontory that it had pierced, the arch was no more. Its rocks, still un-colonized by the ocean’s opportunists, lay in ruins below where the once proud span had reached for the sky. We were bummed. A photo opportunity lost, yes, but also lost was a structure of natural beauty, one that when I last saw it seened solid, and more importantly, a permanent feature of the beach–rather than its geologic ephemerality now exposed to us, reclaimed by its creator, the waves, sadly, before we could really know it.

Picture #200810101 on CCRP, taken on October 1st of this year, show that the arch was gone by then. This screengrab 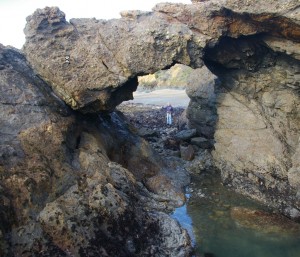 from the large file of this picture shows  the missing arch’s site clearly for those without Highspeed Internet. 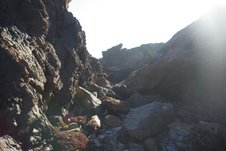 and how it looks now 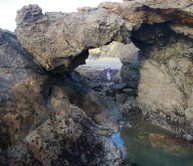 The last photo is a shot from above the arch showing Meg standing on its remnants. 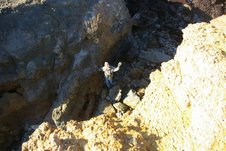 While the arch is gone, it will not be forgotten, at least not by me. For I’ve named it. Using the W, L, and D from the Lou Denny Wayne that drew us there, the A for the arch it is, and an O for the shape it spanned, I’ll at least always know where  WALDO, the Sea Arch was. Enjoy.

P.S. Fortunately, the second goal of the trip, using the low tide to explore the coast south of Bean Hollow Beach, produced an astounding find. A natural wonder that produced as much joy as “Waldo’s” demise produced sadness. I’d like to share this discovery and its amazing neighbors in my next posting.

This entry was posted in Arches, John Vonderlin. Bookmark the permalink.