Hi June,
While this brings to a close, at least as far as I can find in the old San Francisco newspapers, this sad dispute, there is the untold story of the Cowells’,  Majors’,  Coons’ and   the “love child’s” lives after this time.  I’ll relate some of that in my next posting on this matter. Enjoy. John 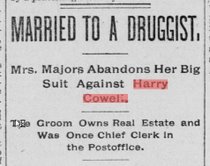