John Vonderlin: Everything You Ever Wanted to know About Ano Nuevo Island

Posted on March 4, 2009 by June Morrall
Story from John Vonderlin
Email John ([email protected])
Hi June,
This ScreenShot of a page from “The Call,” has an excellent article on Ano Nuevo. 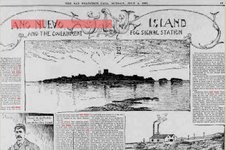