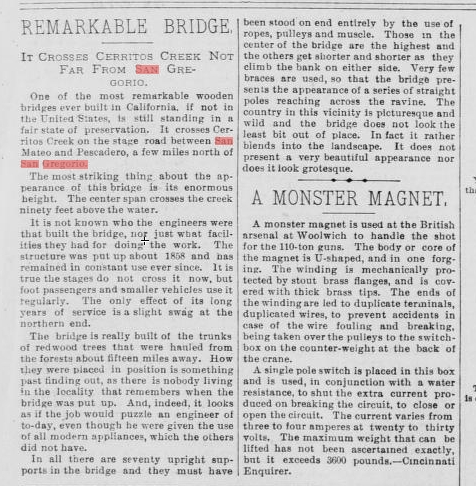 One of the most remarkable wooden bridges ever built in California, if not in the United States. Is still standing in a fair state of preservation. It crosses Cerritos Creek on the stage road between San Mateo and Pescadero, a few miles north of San Gregorio.

The most striking thing about the appearance of this bridge is its enormous height. The center span crosses the creek ninety feet above the water.

It is not known who the engineers were that built the bridge, not just what facilities they had for doing the work. The structure was put up about 1858 and has remained in constant use ever since. It is true the stages do not cross it now, but foot passengers and smaller vehicles use it regularly. The only effect of its long years of service is a slight swag at the northern end.

The bridge is really built of the trunks of redwood trees that were hauled from the forests about fifteen miles away. How they were placed in position is something past finding out, as there is nobody living in the locality that remembers when the bridge was put up. And, indeed, it looks as if the job would puzzle an engineer of today, even though he were given the use of all modern appliances, which the others did not have.

In all there are seventy upright supports in the bridge and they must have been stood on end entirely by the use of ropes, pulleys and muscle. Those in the center of the bridge are the highest and the others get shorter and shorter as they climb the bank on either side. Very few braces are used, so that the bridge presents the appearance of a series of straight poles reaching across the ravine. The country in this vicinity is picturesque and wild and the bridge does not look the least bit out of place. In fact it rather blends into the landscape. It does not present a very beautiful appearance nor does it look grotesque.