These pictures of the Waddell beach bypass road from John Schmale are spectacular. I can hardly wait to see what else he has. I sent he and Angelo, each other’s phone numbers. They both live in Bennett Valley in Sonoma. I also talked to Ed Weeks, (82) who remembers visiting the Pescadero OSR bore tunnel. He was telling me how the engineers for the construction of the Pescadero coast bridge and highway lived at his house(he had to sleep on the sofa) for three years during the construction. Meg and I are going to visit his home(he says you published a picture of it) as soon as possible. enjoy. John

[Message below is from John & Kristina Schmale to John Vonderlin]

Thanks for the response to my email and the encouraging words concerning our book.

I would love to meet Angelo. My wife and I live in Bennett Valley as well. I could probably throw a rock and hit his house. Bennett Valley  area is only a few square miles. I am sorry that I did not get to talk with Angelo at our signing. The one in petaluma was somewhat disrupted by a pair of rabid railfans who would wanted more of our attention than we had time for. I am being kind by using mild language.   The woman who runs the bookstore says they show up for any railroad related event.

have enclosed scans of the Waddell Bluff area. The photos were taken by a civil engineering firm in 1909. I have the complete report produced by them. I will search my files for it.
Some of the line between Tunitas and Scott Junction is easy to find. Some was never graded and only by using old maps, a good eye, and a GPS, will we ever know. I do remember seeing, in the 1970s, a perfectly graded roadbed along the eastern shore of the lagoon at Pescadero Beach and seeing it on a map at San Mateo Hist Society when they were at CSM. The last time I drove by there I could not make out the roadbed. Wow, how quickly things revert to nature.
The photos may help. Two are of the Bluffs at Waddell Beach.  The third shows some grading work done below palmer Gulch.
Have you seen any photos of the fish planting car on the Ocean Shore RR?
I would like to show you what I know about the OSRR Route. There is still much to learn.
Regards, John & Kristina Schmale 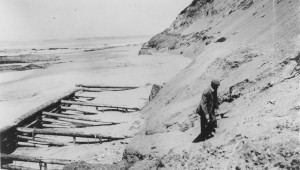 [Message below is from John Vonderlin to John and Kristina Schmale]
Hi John,

I and many other people would love to see the OSR route material and photo you have
of the Waddell bluff area. I’m sure Angelo Misthos, who has been exchanging emails (some of which are on June’s PM website) with me, and is the source of most of my interest in the OSR, would love to talk to you. He lives in Bennett Valley. He made it to your Sonoma booksigning, but there was a line of people waiting to talk to you, so he just bought a book and went home. I’ll send him an email about you contacting me and will make sure I can forward his phone number if you’d like to talk to him.
I’m excited about solving the mystery of where the OSR actually planned to go, and whether our  “educated” guesses were right. Thanks for contacting me, and congratulations on your book. Enjoy. John Vonderlin
P.S. I’ve scooped a large number of articles from the Newspaper Archives about the fishing and fish of the early Coastside that I need to organize, but would be glad to share. —
————————————
[Message below from John Schmale to John Vonderlin] 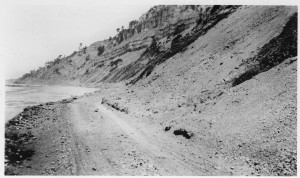 site and have related to what you have to say. You have been following the

Swanton. Please contact me as I did the same back in the 1970’s and would be

happy to compare notes. I have a completed manuscript covering the Ocean Shore

Railroad and the events leading up to its incorporation. I would like to hear

your views on the Ocean Shore Ry. and  coastside history including fishing etc..

of the Waddell bluffs in 1905 to test the action of the waves. Part of their

right of way. I have a photo of it taken in 1909. Tracks were never built on it,

but  it was mostly still intact.

Say Angelo Mithos: The last picture is the one with the man with rolled up papers under his arm and the boy with the pail in the background–pail visible by his right leg. That is the scene looking south toward the bluff on the other side of which is the sluice cut as stated in the Bondholders Report, where these pictures appear. That picture must be the last gasp of the OS as least as far as grading goes as they never went the short distance beyond to meet the sluice cut. Re your attachment depicting the electric car equipped with pantographs: as far as I know the OS never had such cars. I have a picture of such a car (drawing) at the Granada Station. I’ll sent it as an attachment when my daughter comes up. The OS did have three electric locomotives used to haul trains between the 12th and Mission Station in San Francisco to the shops at Barnevald Ave. In S.F., and vice versa, in compliance withe the franchise prohibiting steam power in that portion of the
line. I know of one occasion when the OS violated that rule, taking a steam powered passenger train all the way to the station, engendering a huge protest from residents along Potrero St. who wanted the City to revoke the OS’s franchise–didn’t happen. Believe an S.F. Call article had this too. When the OS finally gave up it sold one of the electric engines tto the Petaluma & Santa Rosa Railway and another to the California Wine Association. Don’t know about the third. The electric motor trucks (wheel and axle assemblies) it planned to use on its electric coaches (if and when!) were sold at that time to the Sacramento Northern or one of its predecessors. The OS acquired two gas-powered rail cars in its last years of operation as an economy move; I don’t know the dispositon of these. John, I don’t remember if I referred you to this site befrore, but if not Google: calisphere university of california.edu. In the search block at right type in ocean shore railway. This will give you a set of photographs of damage to the double-tracked OS grading from the ’06 earthquake, which effectively turned the OS into a single-track steam line. The rock in the far background is Mussel Rock. This is the area I hiked with my uncle and older brother in roughly 1927-28, only about a half dozen years after the rails were torn up, and started my interest in the OS. I’ve noted incorrect info. on the Web that the the earthquake threw track and equipment, even an engine into the surf at Devil’s Slide. Pure fiction. The scenes in the Calishphere photos were about as far as the OS got when the earthquake came. Angelo