John Vonderlin: 1853: The End of the Carrier Pigeon

Hi June,
It was the New York Times Archive that settled, at least in my mind, the Captains confusion, created by the “Sea Bird” article. I now believe that Azariah Doane, was the Captain of the “Carrier Pigeon” at the time of the shipwreck. Using the clunky N.Y.T. Archives I found a June 29th, 1853 notice of
“June 7—Clipper Ship Carrier Pigeon, Capt. DOANE, of Boston, (new) went ashore at the “Heads,” 25 miles below San Francisco; passengers and crew saved. Loss $250,000; insured in Boston $195,000″
It was actually a total of $195,283 for 15 insured parties, according to the July 12, 1853 article in the NYT that I’ve attached a ScreenShot of.
There was also another article that had Sherman Day of Santa Clara, reporting the cargo had been sold for $1,550.
Oddly, in the extensive Doane Family Association Website, it details Azariah’s father as being the son of Captain Joshua Doane and two of Azariah’s brothers, Isaac Snow Doane and Seth Doane, as Captains, but not Azariah. Sadly, he’s never mentioned again in the newspapers and he died the year after he was shamed.
Mr. Waterman, on the other hand, was active in all sorts of salvage operations in the ensuing years and had quite the reputation. Apparently the salvage company that owned the Sea Bird used him as a Captain in their rescue, salvage or charter business. He would also repair salvaged boats and resell them, something that got him some heat when one sank afterwards.
And Mr. Wright is also shown as a Captain of the Sea Bird in other articles. Lastly Captain Haley, was the master of the Goliah at this time, but he was also Captain of the Sea Bird at one time. I hope I’ve cleared this all up. Enjoy. John 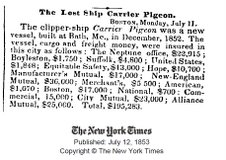