This is about the shipwreck of the Bark J.W. Seaver, on the rocks of Point Ano Nuevo at 9 A.M. on April 10th, 1887.  There are several aspects of the wreck that merit note. The articles detail every name, victim or survivor, and their job on the boat, something I hadn’t seen before. And the Captain thanks and names, in print, some of the citizens who helped the survivors get ashore, also rare. It turns out we “know” these heroes too.

This is from the Shipwreck Data base of N.O.A.A., and describes the wreck of the J.W. Seaver,  on the rocks of Point Ano Nuevo, apparently by the Captain, Mr, Robertson.

“The lee side of the deck was under water and I saw that we could not keep afloat long, so hoping to save life and property, I stood in for the beach. We struck at 0900, a strong wind was blowing and a heavy surf was rolling in, breaking over the ship immediately smashed to atoms. Nothing more could be done and I told the men that we must watch our chance and get ashore as we could on pieces of the vessel. Immediately after we struck she commenced to go to pieces, and every breaker took away some of the cargo and parts of the vessel, and soon the water in shore was a mass of floating wreckage. A party of citizens tied ropes aroung their waists and risked their lives in attempt to help the crew through the breakers.”

Santa Cruz, April 11th.— News reached here last evening of the wreck of the three masted bark J. W. Seaver, owned by A. Crawford & Co., 27 and 29 Market street,San Francisco. The second mate, John Brown, a sailor named Anderson (a Swede)and the Chinese cook were drowned. The Captain, R. Robertson, was brought ashore exhausted. One sailor came ashore lashed to a board. The bark was wrecked at PointNew Year, about three (sic) miles from this city.

She was loaded with hay and salt, bound for the Colorado river, and left San Francisco Friday morning.”  (10 tons salt, 50 tons hay… salt to the desert?)

And this is from the April 16th, issue of “The Dailt Alta.” Note the two heroic Good Samaritans.

“A. Crawford, owner of the bark J. W. Seaver, which was wrecked on Point New Year, stated to an Alta reporter yesterday, that the value of the wreckage that may be recovered is about $700, and it will cost about half that sum to convey it to this port. Tbe officers and survivors of tbe wrecked bark desire to thank Ed. Dickerman and Osman. N. Steele, who were not only instrumental in saving several of the men, but who afterwards showed them every kindness in their distress.”

While I couldn’t find out for sure who the 109 foot long, 230 ton vessel was named after, I did locate a Massachusetts, longtime political/maritime family, the Seavers, that seemed to be the source. There is a perfect fit timewise, James W., a ship captain, lawyer, and Representative for several terms, but he spells his name, Sever, as a few other family members did..  Perhaps, he changed his name’s spelling for ancestral reasons some time in the 10 year period between when the boat was built and he died.

Lastly I’ve attached ScreenShots of a summary of vessels and people lost over the winter storm season of 1886-87, that was in the April 16th, 1887 Daily Alta. A lot of sea widows that nasty winter. Enjoy. John 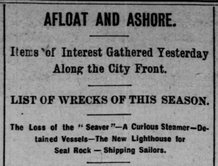 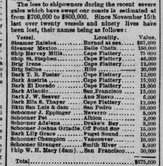