John Vonderlin: The First to Die

“The First to Die”

Hi June,
The editorial, “Let Us Have Light,” led me to professor Alexander Bache, the head of the Office of the Coast Survey, one of the predecessors to N.O.A.A. Thanks to their generous sharing of their Archives online, I captured a treasure trove of old Survey maps and logs that include the Coastside. I also became familiar with more of the details of the amazing events going on at the beginning of the Survey of the West Coast, and how important their work was to those who stayed to develop California after the Gold Rush fever played out. Before sharing the maps of the old Surveys, I’d like to salute the efforts of the early West Coast surveyors and relate the incredible problems they faced. A good place to start is the “First Man to Die” in the effort, Lt. William McArthur. This excerpt is from a N.O.A.A. tribute website and summarizes Lt. McArthur’s role in the beginning of this multi-year project. Though, his Surveys were few and barely touched the Coastside, his work sets the scene for George Davidson’s arrival a few years later. Enjoy. John P.S. For the rest of this story check out http://www.moc.noaa.gov/mt/mcarthur.htm 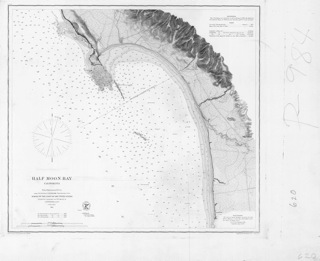