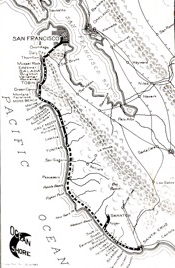 Hi June,
Omondaga should be Onondaga. It was a street in San Francisco that must have been a stop on the OSR. Below is a line about it from the 1910 S.F. Street Guide. Maybe that was the first ocean shore stop on the Ocean Shore Railroad?
I’ve got a picture of the depot, and a map of its route. I’ll check it out. Enjoy. John
Onondaga Avenue (West End Tract), from W s Mission nr Russia Av, N W to Ocean Av
Onondaga, New York was the capital and central area of what we  call “The Six Nations of the Iroquois.” The Wikipedia article on “Iroqouis” helped me remember some of my Back East grammar school history and helped me understand somewhat why a street in San Francisco would be named in the 1800s for a Native American tribe.
————————————-
From JohnVonderlin
Email John ([email protected])
United States Geological Survey (USGS) map of Tobin, Pacifica 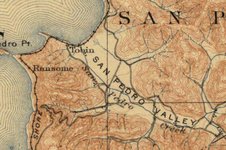 {Note: Working for the OSRR  Railroad Could Be Dangerous–and here is an excellent example.]
From John Vonderlin
Email John ([email protected])
i June,
Here’s another old newspaper story about Green Canyon. The ever-so-lucky Mr. Nggard, mentioned in the article, probably remembered this week for the rest of his life. After being beaten and robbed, and not killed only because he landed on an unseen ledge when thrown over a cliff, he left the Wild West of the OSR labor camps and headed back to the relatively safe and civilized Big City. Only to have the Great Quake and its devastating fires occur just a couple of days later. Was it a case of jumping from the frying pan into the fire? I hope not. Enjoy. John
THROW WORKMAN
OFF A CLIFF
Thugs Kick  Railroad-Man
Till Insensible, Rob Him
and Then  Try To Do Murder
SAVED BY LEDGE
Victim Lands Upon Projec
tion Twenty Feet From Top
and Escapes Awful Death
SOUTH SAN FRANCISCO. April.  l3
John  Nggard, a workman employed on
the  Ocean Shore Railroad has  brought
here news, of a most sensational incident
in which  he figured  as the central figure,
and in which, he almost  lost his life.
A few days  ago he was paid a
small  sum of money due him by the
railroad  company. He repaired to a
saloon  nearby and bought several
drinks. On  leaving the  place he did
not  notice three or four evil-looking
fellows who were  loitering about the
place,  Had he done so he would have
escaped a thrilling experience.
The saloon  is  in Green Canyon, where
the cliffs descend .more than one hun-
dred  feet. The footpads followed
Nggard, kicked him into insensibility,
robbed him, and threw  him over the
bank. Fortunately, the man  fell upon
a projecting ledge on the cliff, about
twenty feet from  the top. How long
he remained there no one knows, but he
was discovered by some of his fellow
workmen, and after much difficulty res-
cued.
Disreputable characters infest the en-
tire  region on the route of the Ocean
Shore Railroad and outrages of various
kinds are of frequent occurrence.
This entry was posted in Uncategorized. Bookmark the permalink.