John Vonderlin: Sympathy for the poor snails on the Cowell Trail 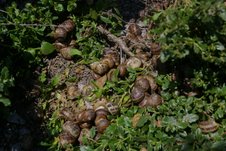 Here’s a bit of silliness about something I’ve never witnessed before. It’s funny how a pod of beached whales, slowly dying in a hostile environment, will bring out hordes of volunteers attempting a rescue, many with tears in their eyes. Yet the same situation, multiplied many times over if it involves snails, is invisible to our hearts, or even worse, produces a darkly humorous view of the matter. Or is that just me? Still suffering from the trauma caused by these vicious predators when I was an avid gardener?

A while ago I posted about the Cowell-to-Purissima Bluff Trail that P.O.S.T. was having built on their property south of the Ritz Carlton.

I recently read that financial problems have stopped the project before completion. When the opportunity arose, I visited both ends of the project and was able to see that the parking lot, the wide, all-weather path, the southerly bluff overlook, and the fencing protecting the farm fields, all seemed to be ready. Apparently, though it’s hard to tell from afar, the three bridges meant to span the small canyons along the path are not doing that. When this will change, I don’t know.

I also viewed another sad situation that day. It’s a tragic tale of a massacre, precipitating a desperate diaspora of the traumatized or injured survivors. A headlong flight that left them in a hostile environment; without food or water, vulnerable to predators, broiling in the sun, and with nowhere to go for succor.

Fortunately, these victims are just common garden snails, often objects of such contempt that they are stepped on just for the pleasing sound the pop of their shells produces.

But, even I, who has been known to play a form of baseball with his siblings using snails as the projectiles, upon viewing their plight, was moved to compassion, in thought, if not deed, by what I saw. Though, I must admit the E word (escargot) might have been intemperately used in jest.

The morbidly curious, or extremely insensitive, or just plain hungry, who are willing to walk out to the Cowell Beach Overlook path, can also view this odd event. It first came to our attention when I noticed a shiny substance on several plants’ leaves alongside the path. Peering closely, I opined that it looked like snail slime, even though that was unlikely, as this is not real snail territory. It’s dry, rocky soil, with unfriendly looking low weeds, most of which had rough, spiny leaves, bound to irritate the fleshy, softness of a snail’s foot.

Noticing the ubiquitousness of this strange substance on nearby low shrubs, I began to investigate.

I started riffling the leaves of a small bush with some of the shiny substance on it and discovered a common garden snail. Ahhh. Mystery solved?

To be sure, I started looking around and apparently the snails had decided we were harmless, because they dropped their cloak of invisibility. Suddenly, they were everywhere. I could see them, alone, hanging from the weed’s lower branches, bunched in groups at the stalk’s base, even clustered at the top of metal poles like dead, brown Brussels sprouts still on the stalk in an abandoned field. There were thousands of them. Check this picture of a small bush: When I shook it, fifty snails dropped to the ground.

Such large numbers of snails, left to survive in such a hostile environment, made no sense. Even in the most snail friendly environment, I’ve never seen such numbers. Was this some ecological oddity? Or another harbinger of global warming? Was a tsunami wave of snail infestation heading toward the hapless gardens of Half Moon Bay?

Probably not, (as you can see in some of the pictures I’ve attached)  the field in the background was being prepped for planting. I believe that was the cause of this diaspora. With their Fava Bean homeland destroyed, those not immediately killed in the massacre had fled for their lives to the much drier strip of vegetation on the side of the field.

I saw a number of snails that, despite parts of their shells cracked, had  crawled to the relative safety of this sun-baked, barren strip. Checking across the path, I was able to find a few who, disturbed by the crowded conditions of their refugee camp, had ventured into the even drier, weedy wasteland nearby.

That clinched my faith in my analysis of this strange scene. Whether the Endangered Species Act applies to this “rare species of snails,” endowed with the power of invisibility, I don’t know.  But, if I could get a grant, I would be glad to go there and rescue several five- gallon buckets of them. I’d bring them home, get them back to good health with cornmeal, and spritz them regularly. Then I’d release them in a far, far better place then they’ve ever been before, a savory Land of Milk and Honey, sometimes called Garlic and ButterLand.   Enjoy. John