Pigeon Point: When Whaling Was “King”

[Image below from Colonel Albert Evan’s book, “A La California.” 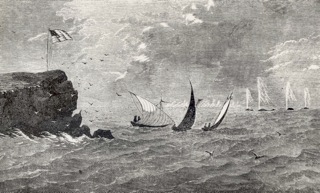 A spectacular red-orange glow accompanied the sunrise just as a school of humpback whales revealed their gleaming black backs on the horizon. Since heading north from their winter breeding grounds in warmer southern waters, the whales had covered a great distance.

From time to time they leaped through the waves. And as they neared the whaling station at Pigeon Point in the summer of 1871, the humpbacks disappeared beneath the sea to feed on sardines. When the whales surfaced again to blow, two lookouts posted on the cliffs above Pigeon Point instantly recognized the humpback’s short, thick body.

The Portuguese whalers, who barely concealed their heavy accents, didn’t hesitate to describe this season as the worst yet. Now, as they peered excitedly through their “sea glasses” at the humpbacks, the men blamed a steady and constant barrage of heavy winds for the less than ideal whaling conditions. Not only that, they confided, but over the years, the number of whales that traveled up and down the California coast actually had declined.

Obviously, they had known better times.

So far the men had captured a single whale this season, and that one taken a couple of weeks earlier, barely produced 25 barrels of oil. While a very large bull (or male) could yield up to 100 barrels, the average whale processed at Pigeon Point produced about 35.

One of the whalers (who had recently arrived from his home in the Azores where he learned the art of whaling as a kid) now bragged to a reporter about a captured whale that gave up more than 90 barrels of oil. (Whale oil was used in place of the electric light which had not yet arrived on the Coastside. In fact, electricity did not come to Pescadero until the mid-1920s, much later than on the east side of the redwood covered mountains, near Stanford University.)

The newcomer whaler quickly pointed out that size did not determine the amount of oil extracted. It was fat, he said, that made the big difference.

As the whales traveled north from their tropical “vacation,” the cows (or females), were skinny because they had recently given birth to calves Back home in the cooler Artic waters of the North Pole, they fattened up, and when they headed back south to the warmer seas, the whalers at Pigeon Point anxiously awaited their prey–for it was now that the fatty whales would yield the highest percentage of oil, and the reward was in the profits.

Meanwhile, the humpbacks played in the waves several miles offshore, obviously unaware of what fate may have in store for them. In the background, two experienced Portuguese whalers crouched low on the cliffs and studied the movement of the humpbacks. They were the lookouts. Behind them stood a dozen neat cottages, home to 17 men and their families.

At Pigeon Point, many of these whalers, who had earlier worked some 14 years at the Monterey Whaling Station, maybe two hours to the south, worked out a business relationship based on the rules of an equal partnership.

On the sandy beach below, two crews consisting of six men each, suddenly shoved off from shore in two very long single masted boats, whaling boats. They hunted in pairs for safety reasons, an important habit learned through years of trial and error. An occupational habit always included the possibility of an enraged whale swamping a boat, drowning all those on board.

The boats were equipped with one or more of Greener’s harpoon guns, which when mounted moved 360 degrees and resembled a small swivel gun. They also had a bomb lance gun which fired an exploding projectile. On this day, with the reporter present, the whalers were sure they would return to the little bay at Pigeon Point with a whale in tow.

But the truth was that whaling was on its way out. It had seen its day. Observers up and down the California coast didn’t hide the fact that the number of whales were decreasing, less every year, they said.

There were estimates that 20 years earlier, in the 1850s, thousands of whales headed south daily between Christmas and the first of February, the time they were easily caught. The success of “shore whaling,” and the accompanying equipment, was said to have helped decimate the numbers of whales which would ultimately put the whalers out of business as well.

A whale that escaped, and survived, seemed to learn from the bad experience, and avoided the shoreline, remaining ten miles or more from the long boats. That made capture trickier. The whalers complained about the difficulty; the only piece of equipment that made the work worthwhile was Greener’s harpoon gun which could travel a great distance. But the writing was on the wall.

The whalers also noticed the decline in the numbers of the California Gray whale. Humpbacks accounted for the largest number captured, and some believed the Gray whale was actually nearing extinction.

History says that those whalers who discovered the California Gray’s breeding grounds in the southern lagoons near Baja California rapidly exploited their find. Here in the delicious waters where the cows nursed their calves, hunters trapped them. Without their mothers, the calves rarely survived, and that is probably why they decreased in number.

Meanwhile at Pigeon Point the intrepid whalers scanned the surrounding sea for a spout. Without warning, one of the hunters called out: “There she blows.”

That was the signal for the long boats to sail off in the direction of the whale. Carefully approaching the target, the whalers peaked their oars, propelling their boats with paddles to refrain from arousing the anger of an unsuspecting male.

They worried about an injured whale turning on them. At the San Simeon Whaling Station, hunters were reputed to have shot 25 bomb lances and several harpoons in to a “right whale” (worth $4000 in oil and whale bone.) But this huge whale survived the multiple hits, smashing one of the boats to pieces, forcing the men to give up the chase.

Often, even if a whale was killed, it sank and could not be retrieved.

One year when the men at Pigeon Point cut up a dozen whales, 10 others slipped away from them. On this day, with the reporter present, the whalers swore success. To show their serious, four men waited on the shore at their station to extract oil from the heaps of blubber.

On the opposite side of Pigeon Point, the “try pots” heated by crude furnaces, formed of rocks and clay, stood ready to boil the blubber into oil. Visitors found it difficult to believe that the foul smelling fluid, which very often dripped down the cliffs to the water’s edge, actually produced soap and oil for lanterns.

The whalers also cleaned and dried the whale bone which they said sold for $.07 per pound in San Francisco. They added that this barely paid for the labor and trouble of saving the bone.

The Pigeon Point whalers said that low prices for oil barely covered their rising marketing and storage costs. In San Francisco whale oil was at that time selling for $.30 per gallon—while the “oil casks” alone cost $.06 per gallon. In more “normal” times, the price of whale oil varied between $.35 and $.50 per gallon, and when the price fell ten cents, the business wasn’t even worth it. Profits at Pigeon Point were marginal.

Worse yet, the Pigeon Point whalers claimed they had been swindled by a New York-based company. According to their story, they shipped 600 barrels of oil back East, after being promised the highest prices, which, in the end they did not get. They had been too trusting and the market turned on them. Now they were falling in debt.

Meanwhile out at sea, the whalers were tracking the spot where the spout had been sighted. It was a humpback. When they were 40 years from their prey, one of the whalers aimed the harpoon gun, shooting him in a vulnerable spot. Down went the large whale, with the cord of the harpoon still attached, and while trying to avoid capture, smashed the waves about but the struggle for life was about to be lost. When the injured whale rose to breathe, a $4.00 bomb lance was fired into the mammal’s head, ending its life.

Fatally wounded, the whale rolled over to one side.

Upon towing the dead whale to the shore station, the whalers congratulated themselves on a job well done—especially because this particular whale exhibited many scars from other attempts to capture him with a harpoon.

Although most folks were still burning whale oil, since 1850 petroleum had been gaining prominence for illumination and lubrication. Obviously, the discovery of petroleum eventually led to the end of the whalers and the shore station at Pigeon Point.