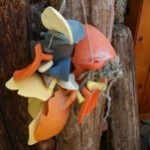 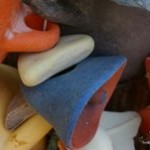 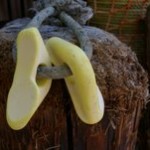 Here’s the story of a couple of  unusual, but related types, of Non-buoyant Marine Debris that I collect. The first collection is as aptly named as the objects that comprise it were in their former lives. In that former life, they had performed what their name demands, under the harshest of conditions, often for many years, until after having been set free, they are transformed on our rugged coast and abandon their useful lives, even consequently their good and industrious name.  I write of my Dontflotz collection.

A Dontflotz is the tethering hole, or the “Mickey Mouse  Ears,” remnant of a hollow plastic fisheries float, after it is shattered against our rocky coast. And as its name suggests, once the float is broken, its pieces do not float. Instead, they move along the bottom, down the coast in the Longshore current, bashing on rocks here and there, losing their more delicate features.  All the while, slowly being eroded, rounded, by the gentle brush of the “River of Sand,” as they make their interminable, silent procession towards a submarine canyon. Or my greedy little hands, if Neptune’s Vomitorium, will co-operate, and interrupt their march to obscurity, spitting them up at Invisible Beach.

The plastic floats that provide the source of my collection are some of the tough guy characters of the marine debris world. They are brute-rugged. They have no “glass chin” and when they were young contenders, looking for fame, they quickly knocked out the ex-champions that did, glass floats. Once freed of the exploitation of their harsh jobs, they rarely submit again to the fisherman’s dominance.  Instead, they are frequently widely-travelled, with gooseneck barnacles testifying to their many years at sea. 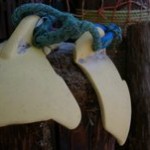 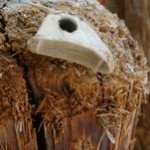 Floating like us, metaphoric corks in the Sea of Life, moved by shifting confluences of the winds, waves and currents that form the North Pacific Sub-tropical Gyre, they pay their dues, often for many years, in one of nature’s harshest environment. They pass the days of their lives in the aptly named, Garbage Patch.

And when their end time comes, the West wind will blow, with strength and persistence, and they will begin their procession towards land. The Vellela Vellela will rush ahead, grounding themselves by the millions, as they herald the floats impending visit. Needless to say, I will  be waiting for their and their Gyric retinue’s arrival on our coast, hoping to save as many of these gems from destruction as possible. To treat exotic visitors from Neptune’s kingdom otherwise, would be a serious breach of trust. But, if my hospitality efforts fall short, it’s good to know, another possible Dontflotz has been added to the huge collection waiting on the sea bottom offshore. Waiting for a chance to join those that have gone before them and been transmogrified to a heavenly Dontflotz. (note: Dontflotz is both singular and plural)

The second and related collection is even rarer thern Dontflotz. These odd objects, shown in the last attached photos, are the delicate remnants of the float world’s ex-champions.  Those poor glass chin losers, pushed out of their noble fisheries professions by the hydrocarbon upstarts, are rarely seen on our coasts anymore. And our rocky shores are not friendly to their fragility, if they do show up. Thanks to Neptune’s Vomitorium I’ve found a few of their identifiable remnants, objects we call “Belly Buttons.” They are the thickest remnant of the gob of molten glass that the float was blown from, the spot the blow pipe is pulled from at the end of the blowing process, officially called the sealing button.

They come as “Innies and Outies,” but I’ve not seen one with a tether hole, as the floats were enclosed in netting, not tethered. My favorite “Belly Buttons,” not shown here, are as wonderfully polished as ancient sea glass. If you’re  interested in learning more about glass floats, Wikipedia has a nice article, with pictures of the sealing button, their origins in Norway in the 1800s, subsequent worldwide use and an explanation of the episodic visits of these odd creatures to our shore.   Enjoy. John 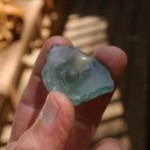 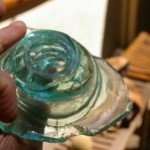 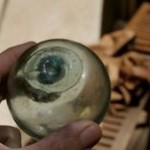