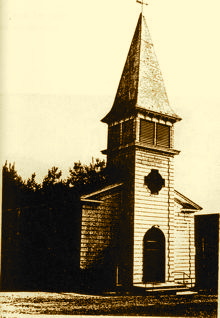 “Built in 1867, this is the oldest Protestant [Congregational] Church in the county. It was originally a simple building with a square, louvered bell tower above the entry. The 40-foot single covered Victorian Gothic spire was added in 1889. The church expresses in wood temple forms of Greek Revival with cornice returns and quoins. The bell tower has a pseudo-rose window in the shape of a Maltese cross and the walls are scored to simulate stone.”

“Greek Revival style was one of the most popular styles in the United States. Buildings of this style are very straight forward statements, with clean, simple lines and precise detailing. Facades are usually devoid of extraneous ornamentation, save perhaps decorated porch posts.

“In its early California stages, Greek Revival is noted for its sharp, severe lines. Building volumes appear as a simple block, or a juxtaposition of simple blocks. Roof slopes are steep, and different building volumes are positioned perpendicularly. Doors and windows are positioned at very regular intervals, often in a symmetrical relationship. Doors have the same proportions as windows, both being long and narrow. Windows are composed of many small panes with simple architraves at the top. Molding around windows and doors and at building edges is very precise. The more articulated examples of Greek Revival have gable returns, i.e., roof plane framing that returns at the building edges.”

This entry was posted in Pescadero Architecture. Bookmark the permalink.