Hi June,
As you detailed in your book Half Moon Bay Memories, Pigeon Point’s history has been punctuated by a series of disastrous shipwrecks. The grounding, the night of November 28th, and subsequent destruction a few days later of the classic wooden boat, the “Lou Denny Wayne,” is just the latest addition to that long list of tragedies.

As I related in an earlier email, while collecting marine debris north of Ano Nuevo point early in December, I found a pair of expensive, sand-clogged Henri Lloyd bibs. When the owner of the Lou Denny Wayne, identified them as his, I promised to drop them off the next time I swung through Santa Cruz. Between that oddity and having read the newspaper accounts of the mysterious accident two miles offhore that hulled the boat, resulting in the desperate decision to try to run it aground on the nearby rocky coast, my curiosity was piqued: Where had it gone aground and what was left?

The newspaper described it as one mile south of Pigeon Point Lighthouse, and even had a good picture of the boat taken from the cliff above. But, extrapolating from the rocks pictured in the online newspaper photo to the series of California Coastal Records Project (CCRP) photos of that part of the coast proved difficult.

The shore is so rocky there that even a small variation of tide can change the exposed rocks’ appearance or submerge them entirely. However, I did tentatively identify a spot I thought was probably the site.

It just so happens this two mile stretch of beach, from Pigeon Point south to Gazos Creek, is one of my favorite float-collecting areas. It’s isolated, lined with difficult to climb cliffs, whose tops are covered by no-tresspassing farm fields. Much of it is virtually inaccessible except during a very low tide, and it has numerous promontories splitting the coast into a series of hidden pocket coves. All of those factors conspire to limit my competition and keep whatever floats ashore there for me to collect. Though even, I, “the Intrepid Traveler,” had never made it the full length.

To the south from Gazos Creek, a steep cliff, holed by the pass-through sea cave that has the best sea life 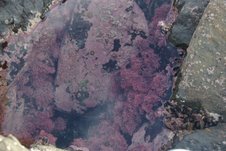 in it of any one I know of on this coast, had always stopped me. And from the north another steep-faced promontory, ending in deep water, had always left about three quarters of a mile unexplored in the middle stretch.

Well, I decided to introduce my curiosity to the extremely low tide on Saturday and go on a adventure.

Parking at the last place legally accessible south of Pigeon Point, we hiked through the brush in a small canyon, then climbed down the hidden ladder 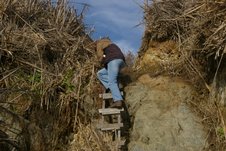 somebody put there a few years ago and headed south. We weren’t expecting to find many floats, as the North Pacific SubTropical gyre has not been disturbed for almost two years by the consistent Westerlies necessary to bring its treasures ashore, And even the buoys from local crabbers have been greatly reduced in number, thanks to the late season start caused by the oil spill. Hmm. I wonder if I could file a claim too?

We weren’t expecting to find the great number of abalone shells that had been driven ashore by the same giant waves that destroyed the Lou Denny Wayne, killed two crabbers out of HMB, and a veteran big wave surfer at Ghost Trees. Unfortunately, I’ve given up collecting shells, feeling they’re too common and not useful for my art.

After about an hour of walking along short pocket beaches, then clambering around the promontories defining them, on wet, algae-slicked rocks, we reached the spot where I thought the Lou Denny Wayne had gone aground.

Absolutely nothing was left. Sigh. Except, to turn around and retrace our hazardous route. But, it was too easy to imagine the possibility of a broken ankle or wrist from a fall given our tiredness taking that route. Besides this was virgin territory and maybe I had been wrong about its watery grave’s location. The possibility of finding somewhere to climb the cliff and dash across the farmer’s field seemed reasonable, so we continued south.

Soon we were totally surprised to come upon this beautiful arch. Surprised, because I’d looked at every one of the large file pictures for this area on CCRP and hadn’t seen any arches at all, let alone this beauty. 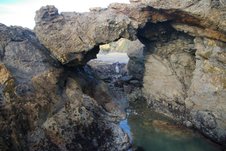 The promontory, whose gap the arch spanned, projected into deep water, necessitating passing under it to go any further south. Fortunately, the rocks above the pool under the arch provided good footing and it was easily accomplished.

But, it just put us at another pocket beach with un-climbable cliffs.

The rocks seaward from the promontory bounding this beach to the south were the worst yet. Big, jagged and heavily covered with slick ribbons of seaweed. Scouting ahead, putting every limb to use, I four-wheeled through the jumble. When I rounded the promontory, and took a rest from my exertions and intense concentration on the questionable footing, I was amazed and delighted to see people ahead. Usually, I’m fearing competitors or disliking interference with the solitude, but not this time. They were as welcome as an oasis in the desert. 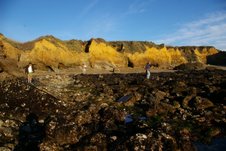 Retracing my path, I assured Meg that safety was around the corner, adding, based on the way they were dressed, we should have no trouble making it all the way to Gazos, the direction I assumed they had come from.

Rounding the promontory, we noticed there was a long white ribbon stretched on the reef from the beach out to the surf. Figuring it was one of those grid studies that biologists do to keep track of changes of the flora and fauna on the reef through time, I asked him if that was so.

“Duh,” was my thought when he told us, “No, this is the spot where the Lou Denny Wayne, had run aground and broken up.”

Because I was focussed on my footing, I hadn’t noticed the large rudder, crab pot, broken glass, giant batteries, and miscellaneous boat parts scattered about or wedged between the rocks. With his long tape measure laid out, the man investigating the boat accident was photographing everything, carefully noting details on his clipboard. While talking with him, we found out he worked for the Monterey Bay Marine Sanctuary (MBMS).

When we asked where the rest of the boat was, he told us most of it had been lifted off the reef by a large helicopter. He also mentioned that that had cost $40,000, for which the owner was responsible. I’m thinking somebody is kicking a man while he is down, but he explained it had been dispatched from Oregon as there were none locally that could handle. Though, the MBNS employee didn’t mention it, I assume his gathering of info would be used in a civil suit. No wonder there is a tradition of the captain going down with the ship.

I unraveled a piece of rope from the crab pot for use on my “Battering Ram” project, then we continued south around the next promontory to find ourselves at the sea cave pass- through I mentioned earlier. Ironically, the boat’s grave was right between the two coolest spots on this part of the coast, the arch and this sea cave.

As we completed the easy last leg of the Pigeon Point- Gazos Creek, trek, I took photos of sizeable chunks of the boat washed into the small inlets. A very sad sight. A tragedy with no loss of life thanks to the captain’s and Coast Guard’s quick actions. But, it was an economic tragedy, and the end of a classic wooden boat’s life. The Lou Denny Wayne was more than 50 years old.

Even a lighthouse couldn’t have prevented this tragedy. It’s a dangerous place, this ocean we live near, especially for those who make their living from it, apparently even when you reach the shore. Enjoy. John Vonderlin 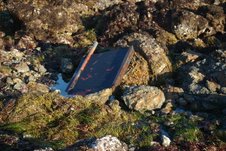