Our Coastside Beaches: 57 Tires & Other Meanings Behind That Magic # 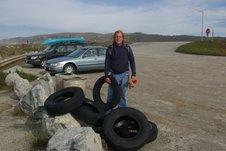 Yesterday’s expedition was quite amazing. The first important event occurred at Pescadero Beach when I added pictures of six more tires coughed up from the ocean to my “101 Tires” artplay project, or: “I’m So Tired,” as I sometimes refer to it.

While I’m sure the poor sanitation worker who has to load them onto his truck will be irritated– along with his private contractor boss, whose profit margin is wounded by the $7 a tire dump fee he must pay– I was quite excited by reaching another significant number.

Last time it was 5 tires bringing the total to 51, just edging past the halfway mark, in any endeavor a memorable point. This time, in one fell swoop. I reached 57, a much more powerful number. 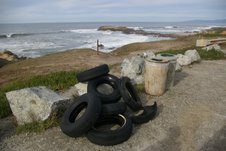 Part II: Meanings Behind The Number 57

By the way, if you’ve ever wondered where the expression, “one fell swoop,” originated, it’s apparently one of the myriad things ole Bill Shakespeare contributed to our language. Shakespeare is first recorded as using it, in Macbeth.

When Macduff hears that his family has been murdered, he says in disbelief:

All my pretty ones?
Did you say all? O hell-kite! All?
What, all my pretty chickens and their dam
At one fell swoop?

The collective image that Shakespeare’s audience would have brought to mind was a falcon plummeting out of the sky to snatch its prey (a kite was a bird of prey before it became a paper and wooden toy.)