The Cemetery in the San Dunes… 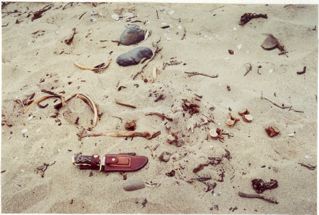 The Cemetery in the Sand Dunes

In the summer of 2001 something white in the sand caught the eye of a hiker as he walked among the wind-eroded dunes near Point Ano Nuevo. There was something about it that made him start digging.

He quickly uncovered a shocking discovery that made him think violence had happened here: Murder.

For there, only inches beneath the sand in front of him, he later told the San Mateo County Sheriff’s Department, there was a skull.

Actually, the sheriff’s investigation would find there were many skulls there and many leg and arm and back and rib bones. Dozens of them. Enough to fill a cemetery.

And indeed, that’s what the hiker had found, a cemetery lost for decades among the shifting sand dunes.

While wrong about this being a murder scene, the hiker was right in surmising that these unfortunates had died violently and the clue was in the roaring of the surf that pounded the nearby beaches.

The sound of the surf is probably the last thing these poor souls heard and is precisely why most of them died.

These dead people had once strode the decks of sailing ships such as the “Sir John Franklin”, the “Coya” and the “Hellespont”.

All perished in the 1860s when their ships, blinded by the heavy fog, struck reefs between Pigeon Point and Ano Nuevo and sunk wuth heavy losses of life. The dead were buried side-by-side in a dunes area originally fenced off and marked with headstones.

The remains of ship’s officials were generally not found at these sites as relatives often claimed them for burial in family plots.

Overtime the strong winds disturbed the sand dune environment, exposing the cemetery site. the shipwreck victims had been buried in redwood coffins–but even this superior wood could not withstand the effect of the sometimes brutal weather and the coffins are now the consistency of wet cardboard.

When I last worked on this story, park rangers were working to stabilize this historical shipwreck gravesite so not to disturb the human remains. A pedestrian boardwalk was to be built with interpretive signs enabling the visitor to learn about the cemetery (and at the same time they will be advised of the laws against disturbing archaeological remains).